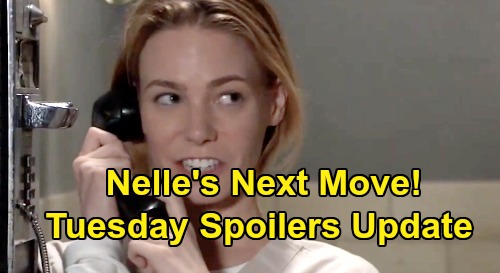 General Hospital (GH) spoilers update for Tuesday, October 8, teases that Nelle Benson (Chloe Lanier) will reach out to someone for assistance. She’ll make a call from Pentonville and hope somebody on the outside can come through for her. Brad Cooper (Parry Shen) makes sense considering Nelle has a parole hearing in the works. He’s the only person she can somewhat count on.

Of course, that’s mostly because Nelle has the power to destroy Brad’s world! She may push him to speak up on her behalf as she seeks freedom. Over with Ryan Chamberlain (Jon Lindstrom), he’ll get a welcome visit on Tuesday. Ryan will be thrilled when Ava Jerome (Maura West) shows up, but he may not like what she has to say.

However, that won’t really matter in the end. Ryan believes Ava is his destiny, and there’s just no changing his mind. He’ll be adamant that they need each other, but he’ll only succeed in rattling Ava during this conversation. Even so, Ava may be captivated by Ryan in some bizarre way. Their twisted connection could be risky since he’ll ultimately turn violent once again.

Sasha will confirm that Lulu’s right; she’s not Nina’s long-lost biological child. The news will hit Nina hard, so expect some tough moments in Tuesday’s episode. Since multiple DNA tests insisted Sasha was the real deal, Curtis Ashford (Donnell Turner) will feel suckered. He’ll struggle to understand all this, but Jordan Ashford (Briana Nicole Henry) will contend that someone had to be secretly pulling strings.

Lulu already suggested Valentin Cassadine (James Patrick Stuart) must’ve been in the loop, so Jordan should suspect the same thing. She may argue that Valentin used Curtis as a pawn in his game. Next, let’s talk about Willow Tait (Katelyn MacMullen) and Harrison Chase (Josh Swickard). They’ll remain relieved over Shiloh Archer’s (Coby Ryan McLaughlin) death, but Chase will wonder if this changes anything for Willow.

GH fans know Willow was desperate to protect Wiley Cooper-Jones, so gave the kid up for adoption. He found a home with Brad and Lucas Jones (Ryan Carnes), but his sudden death led to a swap with Jonah Corinthos. Willow isn’t privy to the switch, so part of her may be sad about missing out on the opportunity to raise her son. Even so, she’ll be glad “Wiley” is safe and loved by his new parents. Willow will believe “Wiley” has a bright future ahead of him.

Other General Hospital spoilers say Dustin Phillips (Mark Lawson) will show off his protective nature. He hasn’t known Lulu that long, but he can tell she has a good heart. Dustin won’t blame Lulu for coming clean about Sasha, and he won’t think anyone else should blame her either. He’ll do his best to defend Lulu as their love story continues to bloom.

It looks like some hot drama’s brewing. We’ll give you updates as other GH details emerge. Stick with the ABC soap and don’t forget to check CDL often for the latest General Hospital spoilers, updates and news.