General Hospital Spoilers: Best and Worst of 2019 – See What Was Hot and Not – GH Year in Review 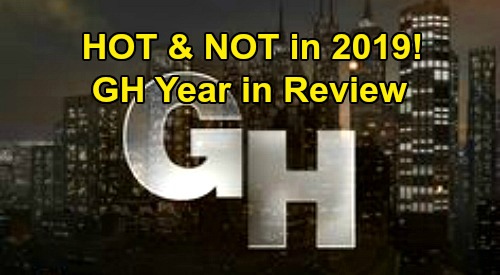 General Hospital (GH) spoilers reveal that the year is winding down, which means it’s time to review some hot plots, shockers and romances. GH fans witnessed plenty of story developments and casting changes, but which ones were winners and which ones fell flat? Let’s take a look at some of the best and worst of General Hospital in 2019.

For starters, we should talk about a real bright spot on GH this year. Willow Tait (Katelyn MacMullen) and Harrison Chase’s (Josh Swickard) love story has been a pleasure to watch. MacMullen and Swickard just ooze chemistry. They light up the screen together in a way that’s both sweet and steamy, which is quite a feat! It’s not often that you see healthy, well-paced relationships on soaps, but “Chillow” really checks off all the boxes.

Something else to put in the best category is one of General Hospital’s most recent cast additions. The casting department found a real gem in Jophielle Love (Violet Barnes). It’s been wonderful to watch Violet bond with her daddy, Hamilton Finn (Michael Easton).

Cynthia Watros also managed to surprise and impress as a Nina Reeves (Cynthia Watros) recast. Does she feel exactly like the Nina we used to know? No, but sometimes change is good! Watros shows off Nina’s softer side and makes her someone to root for.

This year’s best villain was no doubt Shiloh Archer (Coby Ryan McLaughlin). He wore out his welcome and few were sorry to see him go, but we have to give credit where credit is due. McLaughlin nailed the part of a creepy cult leader. He straddled the line of phony charmer and menacing monster perfectly.

However, that brings us to some of GH’s worst decisions in 2019. The Dawn of Day mess felt like a never-ending nightmare. Even now, we’re still hearing Shiloh’s name and dealing with aftermath of his Port Charles presence. It makes no sense for Sam McCall (Kelly Monaco) to be stuck behind bars because of this horrible human being.

The DOD storyline brought plenty of low points, including the dumbing down of Kristina Corinthos-Davis (Lexi Ainsworth) and Sam’s ill-advised plan to trap Shiloh. She put herself at risk, so too many bizarre writing choices were made.

Wasting Tamara Braun’s (Kim Nero) talent certainly falls on the worst list as does Drew Cain’s (Billy Miller) lack of a proper exit. Although Oscar Nero Quartermaine’s (Garren Stitt) death brought some gripping material, the mourning period afterward has been excessive. Redeeming Peter August (Wes Ramsey) just to tear down his character again in 2019 was yet another odd writing decision.

Of course, we should also throw in some things that were kind of in between highs and lows. Hayden Barnes (Rebecca Budig) finally made her long-awaited GH comeback, but her return stint ended far too soon and on a somber note. Marcus Coloma has stepped into the role of Nikolas Cassadine nicely, but Nik deserves smarter writing instead of all these reckless mistakes.

Maura West (Ava Jerome) probably could’ve used better material this year, but she continues to be a powerhouse as usual. West can spin just about anything into gold, so she’s a valuable part of GH’s cast. Despite some of the awful obstacles they’ve faced, it’s been great to see Sam and Jason Morgan’s (Steve Burton) love endure as well.

GH has made an effort to deliver more excitement in the last portion of 2019 – including the new Nikolas’ unmasking along with Brad Cooper (Parry Shen) and Lucas Jones’ (Ryan Carnes) recent car crash. If they can build on that momentum and finally reveal some big secrets, things should be shaping up for a positive start to 2020!