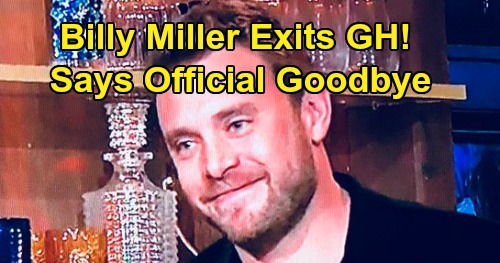 General Hospital (GH) spoilers report that Billy Miller’s exit from General Hospital as Drew Cain can now be officially confirmed. Billy issued an official statement through his agent, Marnie Sparer, and it has been said that his last date of filming took place on July 25. His exit date, final airdate, will be sometime in August, 2019.

Here is what Billy wrote:

“Hello Friends,
With a slight air of sadness, it is time to ponder what “Goodbye” means. However, instead of dwelling on what is gone and sure to be missed, there is another way. Maybe our goodbye is really a remembrance of love felt, an appreciation for lives shared, and the lifelong reminisces that come from embraces and received. Maybe our goodbye is an earnest hope for the brightest path forward for us all. Now, instead of sadness, I am filled with gratitude for all your support, encouragement, and every emotion shared. I cherish the journey we have taken together. Thank you for allowing me into your home and lives. With every ounce of myself, I thank you for being you. I would be remiss in this crazy, unpredictable world we all love so much if I did not hold out the possibility that maybe our goodbye is really…UNTIL NEXT TIME
All My Love,
Billy Miller.”

Then he was revealed to be Jason Morgan (now Steve Burton) after Damian Spinelli (Bradford Anderson) ran his face through a facial recognition program. When Steve Burton returned to GH as the real Jason Morgan, it was discovered that Billy’s character was Andrew Cain, a Navy Seal who was the identical twin of Jason until the accident changed his appearance and his voice due to injury to his vocal cords.

It was also revealed that Drew was the childhood foster brother of Franco Baldwin (Roger Howarth) when Franco started having memories of him. The two once identical twins were separated at birth by Heather Webber (Robin Mattson) and Nurse Betsy Frank (Deborah Strang) who took both Heather’s baby with Scott Baldwin (Kin Shriner), Franco, and little Andrew.

Later, the twins were inducted into a memory transfer study being done by Dr. Andre Maddox (Anthony Montgomery), both being kidnapped by Cesar Faison (Anders Hove) and as a result, Drew had Jason’s memories but none of his own from before the study. Drew also found he had a teenage son, Oscar Nero Quartermaine (Garren Lake Stitt) by Dr. Kim Nero (Tamara Braun). Oscar recently died from a brain tumor.

Recently, General Hospital has started winding up Drew Cain’s story by showing fans, through the eyes of Hank “Shiloh” Archer (Coby Ryan McLaughlin), a mercenary in Afghanistan the same time Drew was. As General Hospital fans know Shiloh is now a cult leader, and Drew was ready to turn Shiloh in for treason against the United States when he was apparently kidnapped for the twins study before he could.

“Hank” as he was then known, was selling fuel from United States Navy installations along with a Seal, Tex (uncast character) for huge profit to enemy insurgents. Tex and Hank were in an explosion caused by an IED, or Improvised Explosive Device (think pipe bomb). Tex was killed but Drew saved Hank, although he regretted it.

Currently in the GH  plot line, Drew receives a mysterious package, and it may be the impetus for him to further investigate his past, which should be wrapped up along with the rest of his storyline in the month of August. It is currently unknown whether Drew will be “killed off” or if the storyline will be open-ended, allowing for a recast or a Billy Miller return.

Fans have had mixed opinions over the years with Billy’s replacement of Steve Burton as the original Jason Morgan, and there have been a lot of fan wars over his pairing with Kelly Monaco as Sam McCall; so much so that there was a faction of “JASAM” fans that warred online with “DREAM” fans and it got so intense that Billy and Kelly both stopped engaging in social media.

“Sam” has recently been paired back with “Jason” onscreen and “Drew” has just been out there on the General Hospital canvas by his lonesome, and that might be one reason Billy decided to leave; he’s not been given a good storyline to play out lately!