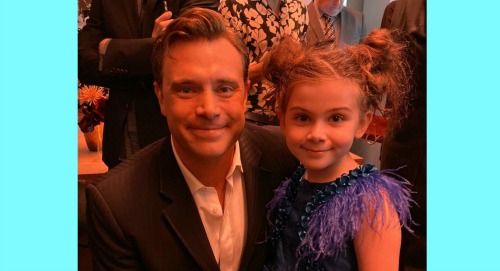 General Hospital (GH) spoilers reveal that one ABC soap alum is celebrating his latest gig. Billy Miller (ex-Drew Cain) is set to appear as Alex Dunn in Truth Be Told, a new AppleTV+ crime drama. He recently joined the rest of the cast for a premiere event, where he was looking quite dapper.

Miller posed for an especially cute picture with his new TV daughter, who shared the photo along with some kind words about him. “My @truthbetold Dad #BillyMiller is the best guy ever,” said Everleigh McDonell, who plays Ella Dunn in the thriller series. It didn’t take Miller’s fans long to comment on the perfect casting choice.

“The two of could truly pass for being related,” one Twitter user insisted. “I am very much looking forward to watching you and #BillyMiller on #TruthBeTold.” Another fan said, “Such a sweet photo!! You really do look so much alike! Great casting and great luck to end up together with #BillyMiller! So looking forward to your scenes. You looked adorable last night Everleigh!”

The concept of Truth Be Told is an intriguing one. It focuses on a true-crime podcaster who works to uncover the real story behind a family patriarch’s death. Octavia Spencer stars as Poppy Parnell in this mysterious series, which is sure to bring several twists and turns.

Poppy decides to launch another investigation into a murder case that put her on the map as a journalist 18 years before. She’s not convinced the person locked up for the killing actually did the crime. Lizzy Caplan, Aaron Paul, Ron Cephas Jones, Elizabeth Perkins, Mekhi Phiefer and other exciting stars are involved in this project.

If you sign up for AppleTV+ and want to check out Miller in his new role, you can stream Truth Be Told starting December 6. The first three episodes of the series will be dropped right away, but the rest will drop weekly. Plenty of General Hospital fans miss Miller on GH, so it’s nice that there’ll be somewhere else to watch him in action.

Let’s hope Miller has many other hot roles in his future! As for what’s ahead in Port Charles, General Hospital spoilers say the drama surrounding “Drew Cain” aka Franco Baldwin (Roger Howarth) will take a dangerous turn. We’ll give you updates as other GH news comes in. Stay tuned to the ABC soap and don’t forget to check CDL often for the latest General Hospital spoilers, updates and news.

My @truthbetold Dad #BillyMiller is the best guy ever ❤️ @AppleTVPlus #truthbetold pic.twitter.com/H8RzdGhfzC