General Hospital Spoilers: Bitter Griffin Can’t Get a Grip – Is Kiki Grief Over the Top, Too Much for Brief Romance? 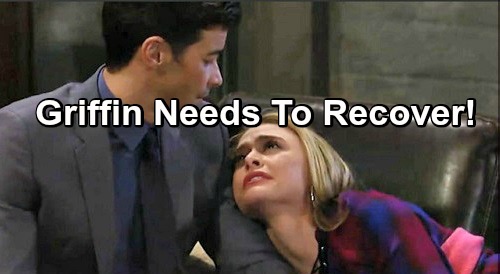 General Hospital (GH) spoilers tease that Dr. Griffin Munro (Matt Cohen) will work to help Anna Devane (Finola Hughes), but Dr. Hamilton Finn (Michael Easton) will take the lead for the most part. There are two reasons for that. One is that Finn is Anna’s boyfriend and is naturally more involved in her story. The other is that Griffin’s still stuck in grief and pretty much devoid of all hope.

Kiki Jerome’s (Hayley Erin) murder really took a toll on Griffin. He was devastated by her life being cut short so tragically. Griffin’s lost his faith and has become an angry, bitter man. He’ll chew out just about anyone who tries to offer comfort. Griffin’s heard all the platitudes before and he’s sick of them. He doesn’t think there’s anyone who can pull him out of this pit of despair.

Of course, we have to wonder if GH is taking Griffin’s grief a bit too far. Is it overkill at this point? It seems like Maxie West (Kirsten Storms) was barely this upset when her beloved husband died – and she was pregnant with Nathan West’s (Ryan Paevey) baby!

Griffin and Kiki hadn’t been together long at all when she died. They hadn’t even said “I love you” to each other yet, although Griffin admitted he was in love after her murder. Still, they had just taken a step out of the friendzone.

With the exception of Ava Jerome (Maura West), Kiki’s other friends and family members seem to be handling this OK. A certain amount of grief is appropriate, but Griffin’s acting like he just lost his wife of 50 years. You’d think the world as we know it is ending. Griffin can barely function and some General Hospital fans think it’s a little excessive. Should Griffin be getting his act together by now?

General Hospital spoilers say Ryan Chamberlain (Jon Lindstrom) will plot more murders soon. As the death toll rises, Griffin may get even angrier. Those murders will only serve as reminders that Kiki’s killer is still on the loose.

Perhaps some good will come out of Griffin’s extreme grief down the road. Someone has to take down Ryan eventually and it might as well be someone feeling vengeful. Could Griffin kill Ryan or at least be responsible for putting him behind bars? We’ll give you updates as other news comes in. Stick with ABC’s GH and don’t forget to check CDL often for the latest General Hospital spoilers, updates and news.