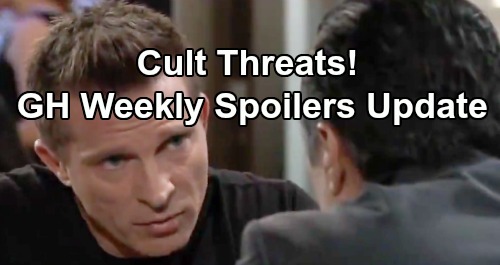 General Hospital (GH) spoilers for the week of January 14-18 tease that we’ll see bombshells and bonding in Port Charles. For starters, Ryan Chamberlain (Jon Lindstrom) will prepare for another shocker. He’ll add a name to his list of planned victims, so someone in PC will face danger. That someone will be Carly Corinthos (Laura Wright)!

General Hospital spoilers say Ryan will summon Carly for a meeting later, which sounds awfully dangerous. Thankfully, Carly will survive for now. Ryan may realize he has to wait until the perfect moment to strike. He probably won’t ever kill Carly, but life-threatening injuries are always a possibility down the road.

In the meantime, Jason Morgan (Steve Burton) will make a vow. He may promise Sam McCall (Kelly Monaco) that he’s going to protect Kristina Corinthos-Davis (Lexi Ainsworth). Jason may vow to figure out Shiloh’s (Coby Ryan McLaughlin) secrets, too. He won’t want Sam to fret as he works to get Shiloh out of their lives.

Sam will try to back Kristina up on her DOD living arrangements, but it won’t be easy. She’ll hate the idea of Shiloh luring Kristina closer and closer to major drama. Over with Dr. Hamilton Finn (Michael Easton), he’ll battle anxiety over Anna Devane’s (Finola Hughes) blindness. She’ll get some news about her condition at GH, but she may not get all the answers she’s seeking just yet.

While Finn ponders Anna’s mysterious illness, Julian Jerome (William deVry) will be suspicious of Willow Tait (Katelyn MacMullen). He’ll have concerns about her motives, so Willow will want to revisit the idea of possible visits with “Wiley” Cooper-Jones. Julian would rather see Willow leave Lucas Jones (Ryan Carnes) and Brad Cooper (Parry Shen) alone, but “Wiley’s” pull will be far too strong.

Of course, Willow doesn’t know that’s not the real Wiley. Her son died suddenly the night Brad brought him home from GH. Brad will keep struggle with the swap secret, so stay tuned to watch him sweat. Elsewhere, Drew Cain (Billy Miller) will take a breather from all his Oscar Nero (Garren Stitt) fears. He’ll put his pain on hold to listen to Jason’s stern warning about Shiloh.

Jason will want Drew to know this guy is truly trouble He’s sure of it, no matter how much Shiloh claims to be a changed man. The act isn’t fooling Jason, so he’ll want Drew to understand what he’s up against.

Finally, Lulu Falconeri (Emme Rylan) will get some disappointing updates. Peter August (Wes Ramsey) will most likely refuse to approve her latest story. If The Invader knowingly published something that could hinder the murder investigation or make matters worse, Peter would feel horrible about it. He feels bad enough for all his previous mistakes, so he doesn’t need to start making more.