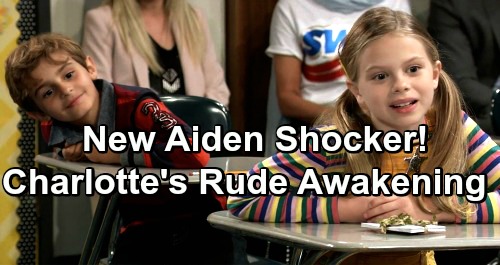 General Hospital (GH) spoilers tease that Aiden Webber’s (Jason David) issues will once again become a hot topic. Willow Tait (Katelyn MacMullen) has promised to keep an eye on the situation in her classroom. Charlotte Cassadine (Scarlett Fernandez) was confronted about her behavior and offered an apology, but that doesn’t mean the trouble’s over.

Aiden still seems uneasy and there’s a good reason for that. In addition to Aiden’s self-esteem problems, Charlotte pointed out that other kids could still make him a target. Unfortunately, he’s kind of the class weirdo.

Thanks to Charlotte, everyone’s used to joining in the taunting. You can bet it’s going to be a tough habit for Aiden’s cruel classmates to break.

In fact, bratty Charlotte may pay the price in an unexpected way. She was the ringleader of Aiden’s tormenting, so what happens when she suddenly backs off? Charlotte was mostly upset about her parents’ disappointment and not Aiden’s pain, but she may have a different point of view soon.

If Charlotte sticks up for Aiden or refuses to engage with the other bullies, she could become a victim herself. It’s a shame that the toxic environment has to get worse, but at least Charlotte may learn a valuable lesson.

Charlotte may have to get some first-hand experience to see what Aiden really goes through on a daily basis. On January 23, General Hospital spoilers say Charlotte will need some comfort from Laura Collins (Genie Francis). Maybe Charlotte will go to her grandma after she also becomes a tormented soul at school.

As for Aiden, GH fans can watch him bake cookies with Franco Baldwin (Roger Howarth) on January 24. That’s pretty much the cutest spoiler ever, but it could serve a real purpose, too.

January 25 will bring a heartfelt chat between Franco and Elizabeth Webber (Rebecca Herbst), so they may discover some deeper things about Aiden and hopefully gain enough of an understanding to help him.