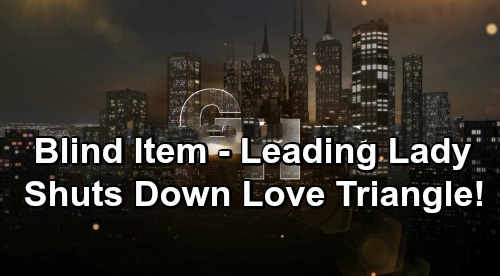 General Hospital (GH) spoilers tease that there could be some juicy behind-the-scenes drama. Soap Opera Digest recently released a new blind item, which could be about any of the four main soaps. However, there are certainly good reasons to speculate that this particular blind item might fit with General Hospital. Let’s consider a few of them and see if we can crack the case of a nixed love triangle.

According to this leaked info, one leading lady shut down her show’s plans for a romantic triangle. She wasn’t interested in having her character caught up in that, so her wish was granted. What clues can we gather from that? For starters, it’s someone with leading lady status and influence at the show.

Not just anyone can waltz up to TPTB and tell them not to do something. It’s most likely someone who’s been at the show for quite a while. The show probably has a good reason to keep them happy and willing to stick around. This clearly isn’t some newbie who’s being a diva; it’s likely a vet who was watching out for her character and had other ideas about what she would do in that situation.

One obvious option here is Finola Hughes (Anna Devane) – and we don’t mean the current triangle-ish drama with Dr. Hamilton Finn (Michael Easton) and Robert Scorpio (Tristan Rogers). In fact, that may be the setup that’ll eventually help Anna avoid the real triangle: one with Finn and Hayden Barnes (Rebecca Budig).

There have always been rumblings about Hughes’ lack of interest in romantic stories. She’s stated in interviews that she enjoys working with Michael Easton, but having Anna involved in some catty fight over Finn wouldn’t be right. That’s not how Anna rolls at this point in her life.

GH may be setting Robert up as a backup love interest for Anna. She might end up with him again after Hayden steals Finn’s heart. There’ll be a child in the mix, so that’ll be another complicated factor. Of course, not doing a love triangle doesn’t have to mean Finn will jump right into Hayden’s arms. Once Hayden is back with a child in tow, Anna may simply bow out to let Finn decide what he really wants.

As for Anna, she tells Robert that their reunion isn’t happening in the episode airing Monday, May 20. Anna notes that he couldn’t possibly expect her to try again given their complex history. Naturally, that’s just the kind of dialogue someone would say if they were indeed going to try again. When a character is convinced something won’t happen on a soap, it usually happens after all.

Does this blind item suggest Finn and Hayden will be the pairing to root for? Are they the endgame couple? Even if this blind item’s about another soap or leading lady, we’d say a Hayden and Finn reunion seems likely.