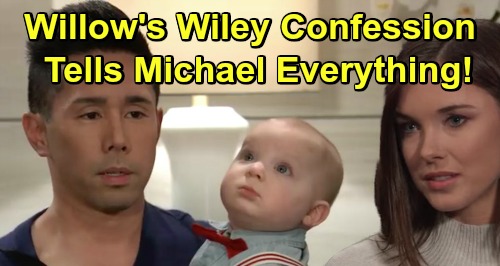 General Hospital (GH) spoilers tease that Willow Tait (Katelyn MacMullen) will have a heated confrontation with Brad Cooper (Parry Shen) on this week’s new GH episodes, March 11-15. They agreed that no one else should know about her birth mom connection, but Willow finds it difficult to resist being around “Wiley Cooper-Jones.” If “Wiley” is nearby, Willow always finds herself drawn to the kid.

Of course, the idea of Willow getting too close to “Wiley” makes Brad nervous. That’s because Willow isn’t really “Wiley’s” birth mother. She’s only the mom of the original Wiley, who died shortly after coming home from GH. Brad is in deep thanks to the baby swap he pulled off with Nelle Benson (Chloe Lanier). He’ll be desperate to keep his secret, so he’ll end up getting agitated with Willow.

During the week of March 11-15, General Hospital spoilers say Michael Corinthos (Chad Duell) will also get caught in conflict. He’ll be stuck in the middle of an argument, so it sounds like that’ll involve Willow and Brad’s feud. Once Michael joins the action, it should leave Brad even more on edge. The last thing he wants to do is tip Michael off to trouble.

Nevertheless, you can bet Michael will be suspicious. GH fans know Michael’s got a good heart and often offers a sympathetic ear. He’s formed a solid bond with Willow, so he may pull her aside and ask what’s going on. Michael might point out that there’s obviously more to Willow’s story with Brad. He may push her to tell the truth about their apparent connection.

Even if Willow makes up excuses at first, it’s just a matter of time until she comes clean to Michael. He recently hit things off with Sasha Gilmore (Sofia Mattsson), but Willow’s eventual confession could change the game. It may draw Michael to “Wiley’s” fake birth mom once again.

This could be what helps them bond enough to form a romantic relationship and puts them on the path to the shocking truth. Willow will face pain since she’ll learn her son is actually dead while Michael faces both joy and sorrow over Jonah Corinthos. He’ll be glad to know his baby boy’s alive, but he’ll also have to deal with how much he’s missed. Michael has lost precious months that he can’t get back.

Will one little fight with Brad kick off a massive chain reaction? He may regret letting himself face off with Willow. This could be the first step toward the next phase of this General Hospital storyline. We’ll give you updates as other GH news comes in. Stay tuned to the ABC soap and don’t forget to check CDL often for the latest General Hospital spoilers, updates and news.