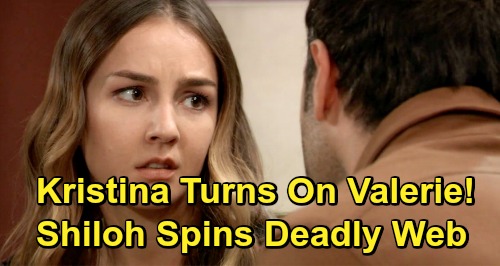 General Hospital (GH) spoilers tease that Shiloh Archer (Coby Ryan McLaughlin) will have Kristina Corinthos-Davis (Lexi Ainsworth) right where he wants her. He recently indicated that he has big plans for Kristina’s future. Based on his expression, it’s safe to say those plans are quite sinister.

However, Shiloh will keep up the nice guy act for now and try to pull Kristina even deeper into Dawn of Day. She’s already embraced their tenets and everything DoD has to offer. Now Shiloh has to take the next step and start using the organization to turn Kristina against her loved ones. A Dawn of Day rally will give Shiloh just the opportunity he needs.

The trouble will begin when Kristina asks Valerie Spencer (last played by Brytni Sarpy) to attend a rally with her. We should note that Sarpy scored a contract role on The Young and the Restless, so she hasn’t been filming at GH for a while. Word has it Valentine’s Day likely concluded Sarpy’s General Hospital run, so they may have brought in a recast to wrap things up with these scenes.

It’ll be easy to write Valerie out of Kristina’s story since DoD will leave them at odds. General Hospital spoilers say Valerie won’t be a fan of Shiloh’s rally speech. She’ll find some flaws in his logic, which Kristina won’t appreciate. She’ll take it as personal criticism since she’s part of this community and agrees with everything it stands for.

Valerie will try to smooth things over after their tiff during the week of March 11-15. Unfortunately, Kristina won’t be willing to listen. That’ll mainly be thanks to Shiloh. When he gives Kristina advice, she hangs on his every word and follows orders. Shiloh will argue that Kristina can’t let the naysayers drag her down. He’ll encourage her to put up some walls and keep Valerie at a distance.

Shiloh will push Kristina to reevaluate her life and the people in it. He’ll want her to cut out the people who don’t fully support her journey, so it won’t be long until other friends and family members get shoved aside. Shiloh will also give Kristina an even bigger role at Dawn of Day. He’ll think she’s ready for more responsibilities, so Kristina will be over the moon. Shiloh’s trust means the world to her.