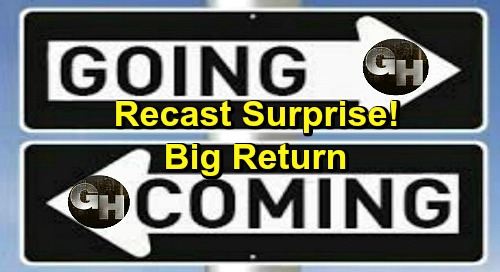 General Hospital (GH) spoilers reveal that we’ve got some comings and goings news to pass along. For starters, let’s talk about a big return that’s happening this week. Andre Maddox (Anthony Montgomery) will pay Anna Devane (Finola Hughes) a visit to talk about something important. GH fans haven’t seen Andre since last spring, so it’ll be good to have him back on our screens once again.

Anna is desperate to learn more about her memories, which she knows may have been manipulated. She’ll discuss the issue with Andre, who will confirm that Anna indeed remembers certain things that her sister lived through. However, Alex Devane Marick (Finola Hughes) may be the only one who can tell Anna which memories are hers. That’s likely info that Andre just isn’t privy to.

Of course, this whole storyline is a way to undo Anna’s connection to Peter August (Wes Ramsey). Many GH fans weren’t happy about Peter being Anna’s long-lost child, so there’s an easy fix. General Hospital spoilers say Peter will be Anna’s son instead, so that bombshell should cause quite a stir down the road.

In the meantime, let’s talk about Valerie Spencer (last played by Brytni Sarpy). She’ll show up in some scenes with Kristina Corinthos-Davis (Lexi Ainsworth) this week, but will she have a different look? The timing doesn’t really add up for Sarpy to have filmed any remaining scenes. She’s been busy playing her new role on The Young and the Restless, so GH might debut a recast to finish off Valerie’s latest arc.

Still, it’s possible Sarpy was able to squeeze in one last GH scene or two before she started her job at Y&R. Regardless, General Hospital spoilers say some conflict is headed Valerie and Kristina’s way! Shiloh Archer (Coby Ryan McLaughlin) is a master manipulator, so he’ll try to drive a wedge between Kristina and her close friend – as well as anyone else Kristina currently cares about.

In other news, a GH alum has scored a new primetime gig. In addition to playing Marcie Diggs on Diggstown, Vinessa Antoine (ex-Jordan Ashford) will be featured on an upcoming episode of Fox’s The Resident. She’ll play a pregnant woman who’s a crucial part of the plot. Antoine’s episode should air during the month of April, so her fans will certainly look forward to her guest spot.