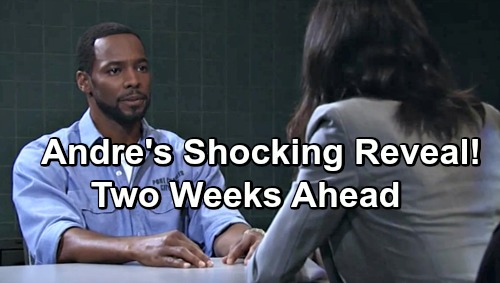 General Hospital (GH) spoilers tease that Anna Devane’s (Finola Hughes) suspicions will grow stronger. She couldn’t pry all the info she wanted out of Dr. Arthur Cabot (Time Winters), but there’s someone else who could help – someone who’s been holding out on his pal! Of course, we’re talking about Dr. Andre Maddox (Anthony Montgomery).

Anna and Andre had a solid friendship at one time. In fact, they toyed around with the idea of a romance. However, Andre left Anna out of the loop on something important, and it’s about to blow up in a big way.

When Anna confronted Dr. Cabot about what memories might actually belong to her sister, he argued she would have to ask Alex Devane Marick (Finola Hughes) about that. Anna may not be keen on tracking Alex down if she doesn’t have to. Fortunately, Andre could provide the confirmation Anna needs.

During the week of March 11-15, Anna’s suspicions will be backed up by Andre. Does that mean Andre will return for this important conversation? It’s possible it’ll be done through an offscreen phone chat, but it’s equally possible Andre will do this in person. This is a big deal since it involves Anna’s memories and will affect her life moving forward.

Anna may even have some suspicions regarding Peter August (Wes Ramsey) between now and then. Andre might confirm those as well, which could mean he’ll be the one to deliver the he’s-not-really-your-son bombshell. GH spoilers suggest Alex actually gave birth to Peter, so it sounds like Anna will have to break that news sooner or later.

How is Peter going to take this? He’s gotten to know Anna quite a bit better lately, so this could be a bigger blow than he anticipates. The same goes for Anna, although she should think it makes way more sense than the thought of sleeping with Cesar Faison (Anders Hove) for a scheme.

Peter was wary of accepting Anna as his mom, so he may be even more cautious when it comes to Alex. Anna was open and accepting, but Alex is manipulative and dangerous. General Hospital spoilers say the revelations ahead are the perfect setup for Alex’s inevitable comeback.

Are you excited to see the next chapter of the memory-mapping saga? Are you glad General Hospital is undoing the mistake they made or did you like Anna and Peter’s connection? We’ll give you updates as other GH details emerge. Stay tuned to the ABC soap and don’t forget to check CDL often for the latest General Hospital spoilers, updates and news.