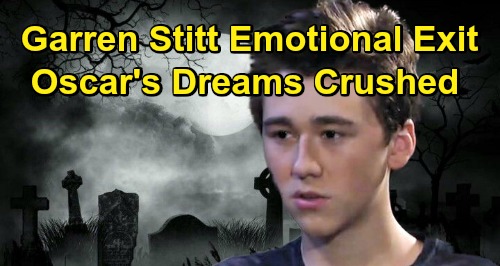 General Hospital (GH) spoilers tease that Oscar Nero’s (Garren Stitt) stint on the ABC soap is winding down. After Oscar’s clinical trial failed, Dr. Kim Nero (Tamara Braun) felt horrible for giving her son false hope. Oscar didn’t even want to undergo the treatment since he didn’t expect it to work, but he was ultimately persuaded by Josslyn Jacks (Eden McCoy). She wanted him to at least pursue one last chance at life.

Sadly, that chance didn’t pan out and now Oscar’s marching toward a grim fate. Many General Hospital viewers were hoping for a better outcome. Since soapy twists happen often in Port Charles, some fans figured there might be one at the end of all this. Oscar is a sweet kid who barely even had a chance to know his dad and extended family. His life’s being cut short so tragically and that’s hard to accept.

However, it appears we should indeed get ready for some difficult goodbyes. A GH insider who regularly posts accurate leaks posted about this story. This person maintains that Oscar won’t get a miracle. There’s no shocking cure that’ll pop up when the end is near. According to this insider, Oscar will end up dead as planned. Garren Stitt is set to leave the show in the near future.

This isn’t the news that hopeful fans wanted, but it’s better to know than not know! Like Oscar’s loved ones, we want to be prepared. Having time to come to grips with a character’s death often makes it easier. Kiki Jerome’s (Hayley Erin) murder was awful, but at least there had been rumblings about it for months. It lessened the shock and pain when the big day arrived.

Although this isn’t official General Hospital confirmation on Oscar’s demise, it’s pretty darn close. This insider is trustworthy and really knows her stuff. It’s safe to go ahead and stock up on tissues for the aftermath of Oscar’s passing.

On the bright side, this is sure to give Billy Miller (Drew Cain), Tamara Braun and Eden McCoy some gripping material. They should score some good stuff to put on their Daytime Emmy reels next year. General Hospital spoilers say the conclusion of Oscar’s storyline will bring some can’t-miss episodes.

A dark cloud is rolling in over Port Charles, but Oscar’s friends and family members will just have to remember the good times! We’ll give you updates as other GH details emerge. Stay tuned to the ABC soap and don’t forget to check CDL often for the latest General Hospital spoilers, updates and news.