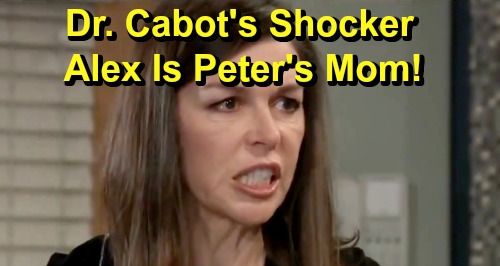 General Hospital (GH) spoilers tease that Anna Devane (Finola Hughes) is in for a shock. She’s been frustrated with Dr. Arthur Cabot, who’s been dragging his feet on answering her questions. However, Anna’s finally getting some info and she’s not liking what she’s heard so far!

Dr. Cabot told Anna she was a participant in his twin study, but she promptly shut down the idea. Anna didn’t think that was possible, but Dr. Cabot replied that she simply didn’t remember it. Naturally, GH is going to work the manipulated memory angle here. Anna may not have experienced a total wipe and replacement like Drew Cain (Billy Miller), but her brain has definitely been scrambled.

Then again, perhaps Anna did face the same treatment and had the procedure to reverse it. In that case, maybe the outcome wasn’t perfect. It’s possible Anna remembers most of her own memories, but still has a few of Alex Devane Marick’s (Finola Hughes) as well. That might’ve even been part of the design. Alex could’ve pushed for it or further manipulated the situation in some way.

Regardless, there was apparently a way for Anna to forget some things and recall others. She doesn’t have a clue she was involved in this study, but it seems another memory is completely bogus. Anna fully believes she gave birth to Peter August (Wes Ramsey) and gave him up for adoption.

That plot point was a major flop for most GH fans. Many viewers didn’t like the fact that Anna willingly slept with Cesar Faison (Anders Hove) as part of her scheme. Fortunately, it appears the show’s about to undo all that.

General Hospital spoilers suggest that Peter is Alex’s son, not Anna’s. It hasn’t been officially confirmed, but the leak’s been out there for a while now. The new information from Dr. Cabot certainly backs everything up. It makes more sense for Alex to have been the one who conceived a child with Faison.

Plus, this will cause plenty of drama for poor Anna. She’s finally starting to bond with Peter, who she clearly cares about. Anna’s going to be devastated if the memory of Peter’s birth isn’t her own. General Hospital’s latest preview video shows Anna lunging toward Dr. Cabot and calling him a “son of a bitch.” She’s obviously furious, so she might learn the Peter bombshell in Friday’s episode.

If not, the shocker will likely hit later. It sounds like Anna will have to break the news to Peter eventually. Will he seek out his real mom, Alex? Would that be a terrible mistake? We’ll give you updates as other GH details emerge. Stay tuned to the ABC soap and don’t forget to check CDL often for the latest General Hospital spoilers, updates and news.