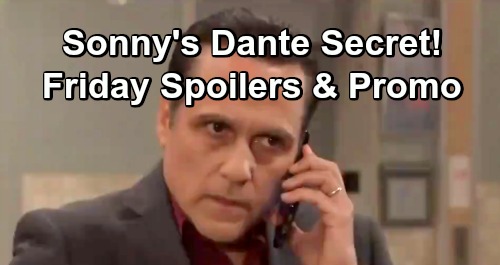 General Hospital (GH) spoilers for Friday, February 22, tease that Franco Baldwin (Roger Howarth) will get fed up with Jordan Ashford’s (Briana Nicole Henry) plan. It’s bad enough that Franco had to admit to killing Kiki Jerome (Hayley Erin) and the other victims in court. Now Jordan wants Franco to boast about it in a tell-all interview.

Franco will grow increasingly agitated as Jordan insists this will work. She’ll think it’s the only way to rile the real killer up and spark some mistakes. General Hospital spoilers say Franco will vow to call Elizabeth Webber (Rebecca Herbst) and tell her the truth. It’s brutal for him to deceive her like this, especially when she had enough faith to marry him.

However, it seems Jordan will talk Franco down and keep him committed to their scheme. In the meantime, Liz will need Dr. Terry Randolph’s (Cassandra James) help. She’ll insist that something’s up and hope Terry can pitch in on getting answers.

In Ferncliff’s basement, Laura Webber (Genie Francis) will pound on the door and call out to anyone who might hear her. She’ll be desperate to escape with Dr. Kevin Collins (Jon Lindstrom), but it looks like they’ll both be out of luck for now. At GH, Sonny Corinthos (Maurice Benard) will call someone and request secret assistance. This may involve a search mission for Dante Falconeri (Dominic Zamprogna).

Across town, Ryan Chamberlain (Jon Lindstrom) will stroll around with his bride-to-be on his arm. Ava Jerome (Maura West) agreed to marry “Kevin,” so they’ll happily rub it in when they spot Carly Corinthos (Laura Wright). As usual, Ava and Carly will get into a fierce fight. This can’t be good for Carly’s unborn baby, but there’s just no way she can avoid conflict. That’s not in Carly’s nature!

Over with Jason Morgan (Steve Burton), he’ll want to be sure Shiloh Archer (Coby Ryan McLaughlin) isn’t playing Sam McCall (Kelly Monaco). Shiloh wants to take Sam to “The Tower” and show her something that will supposedly change her life. As Jason’s fears grow, he’ll take steps to protect Sam by any means necessary.

Back at GH, General Hospital spoilers say Anna Devane (Finola Hughes) will have a serious outburst. With tears in her eyes, she’ll call Dr. Arthur Cabot a “son of a bitch” and lunge toward him. This undoubtedly involves the memory manipulation that Dr. Cabot mentioned. Anna assured him that she never participated in his study, but he quickly pointed out that she simply doesn’t remember doing it.

General Hospital spoilers hint that Peter August (Wes Ramsey) is actually Alex Devane Marick’s (Finola Hughes) son, not Anna’s. Will Anna find out Peter’s birth was a planted memory on Friday? Will GH take a little longer to drop that bomb? We’ll give you updates as other news comes in. Stick with the ABC soap and don’t forget to check CDL often for the latest General Hospital spoilers, updates and news.