General Hospital Spoilers: Ryan’s Final Murder Plot, One Last Target to Upstage Franco – See Who the Victim Will Be 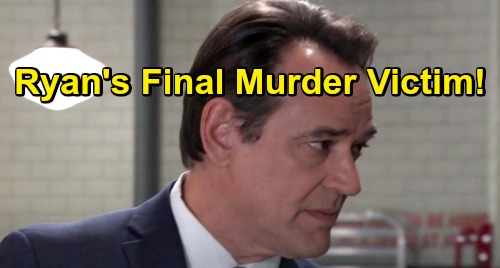 Whenever Ryan commits a murder, there are usually a couple of motives behind it. With Kiki Jerome (Hayley Erin), Ryan wanted to please Ava Jerome (Maura West) in his own twisted way. With Peyton Mills (John Patrick Jordan) and Mary Pat Ingles (Patricia Bethune), Ryan had to get rid of potential threats. However, the goal behind all the killings was to get notoriety and attention.

Once Franco’s getting all the glory, Ryan will be left seething. Jordan Ashford (Briana Nicole Henry) believes this is a solid tactic to flush out the real killer, but it’s also a very dangerous one. There’s a good chance Ryan won’t be able to resist killing again.

Perhaps Ryan will plot another murder and plan to prove a different criminal mastermind was behind these crimes. It’d be risky, but Ryan might think the payoff would be worth it. He’s the kind of guy who would put his own strategy in jeopardy to get the credit he craves.

Ryan’s still got a hit list with names ready to be checked off. It’s not like he’d have to work hard to come up with somebody. Ryan can just take his pick from what’s left on the list or find a new enemy to target. Someone else could land on his bad side between now and then.

General Hospital spoilers say Jordan’s upcoming accident will leave Franco reeling. No one else knows the details of their guilt plea scheme, so Franco will be in a tight spot. If the true killer would take action while he’s locked up, it would really help Franco out. Unfortunately, it could also leave another Port Charles resident’s life at stake.

We seem to be nearing the last chapter of this serial killer storyline. Will this be Ryan’s final murder – or at least his final murder attempt? Who will be the person or people he targets? Ryan could go for Dr. Kevin Collins (Jon Lindstrom) and Laura Webber (Genie Francis) as a twofer. He’ll have to silence them somehow, so that might be his best option.

Plus, there’s Lulu Falconeri (Emme Rylan). She’s poised to remember more about her attack eventually, so she could become an intended victim again if she’s not careful. All of these characters would likely survive whatever Ryan has in store, but that wouldn’t stop him from trying to take them out.

Since Matt Cohen (Dr. Griffin Munro) is reportedly leaving General Hospital, Griffin could find himself truly at risk. If GH wanted to give Griffin a gruesome sendoff, they could certainly do it. He just barely avoided Ryan’s last death trap, so the next one might succeed.

Olivia Jerome (Lisa LoCicero) has also been suspiciously happy lately, which could mean GH is setting her up for a fall. Even Ava could become Ryan’s planned victim if she discovers the truth. No one is safe in PC!