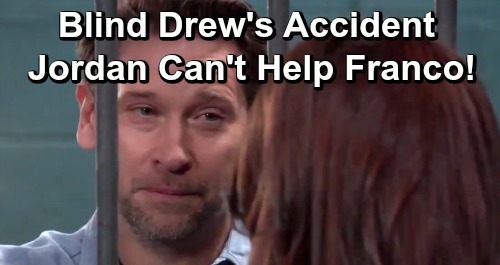 General Hospital (GH) spoilers tease that Franco Baldwin’s (Roger Howarth) choice will come back to bite him. Jordan Ashford (Briana Nicole Henry) has come up with a plan, but it involves a great deal of risk. Franco will have to plead guilty to the murders as well as Lulu Falconeri’s (Emme Rylan) attack. He’ll loathe the idea of taking credit for Kiki Jerome’s (Hayley Erin) demise, but it’s all part of the plot.

Jordan believes Franco was framed, but she’ll think the real killer will change his mind if Franco actually claims to have killed these people. She can tell this murderer likes the attention, so she’ll think she can trap him if Franco’s getting all of it instead. The problem is this scheme will be kept between Jordan and Franco.

Curtis Ashford (Donnell Turner) knows a hint of what’s up, which will undoubtedly be important later. However, he’ll also be distracted and perhaps unable to help Franco for a while. Sadly, the same goes for Jordan herself! That’s because Drew Cain (Billy Miller) will accidentally run over Jordan in his car. It seems he’ll suddenly go blind and have an accident due to his inability to see Jordan walking.

Curtis will be distracted by all the GH chaos surrounding Jordan and Drew. There’s also a chance something will happen that changes his mind about Franco. Perhaps more evidence will surface that convinces Curtis that Franco is guilty. Regardless, he won’t be quick to speak up in Franco’s defense when the plan goes horribly wrong.

That means Franco will be stuck with his bogus guilty pleas. When he tries to backtrack and clarify what happened, he won’t be believed. It’ll just look like Franco’s panicking and attempting to wiggle out of trouble. Of course, Elizabeth Webber (Rebecca Herbst) will surely buy Franco’s story, but what can she do? Liz isn’t a cop, so her faith in Franco will mean nothing.

Besides, Liz won’t be too happy with Franco for leaving her out of the loop in the first place! It’ll definitely cause a rift for this couple. General Hospital spoilers say Franco will just have to hope Jordan pulls through and can explain their scheme later. Of course, it might help if Ryan Chamberlain (Jon Lindstrom) kills again while Franco’s locked up. It would at least bring some doubt about Franco’s guilt.

General Hospital spoilers say Franco has a rough time ahead of him, but Jordan should come out of her coma at some point. Sooner or later, Ryan will have to pay the price for his actions. We’ll give you updates as other GH news emerges. Stay tuned to the ABC soap and don’t forget to check CDL often for the latest General Hospital spoilers, updates and news.