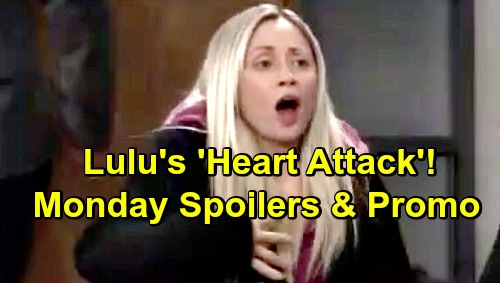 General Hospital (GH) spoilers for Monday, February 18, tease that Alexis Davis (Nancy Lee Grahn) will cross paths with her therapist. She’ll run into Dr. Neil Byrne (Joe Flanigan) and get a bit flustered, but she’ll do her best to move past the incident. There seems to be a spark between them, so that’s only going to get more complicated as Alexis’ therapy sessions continue.

Alexis will also check in with Dr. Kim Nero (Tamara Braun) on Monday. She’ll seek updates on Oscar Nero (Garren Stitt) and hope his family’s hanging in there. Alexis got to know Oscar when she was representing him, so she knows he’s a great kid. She’ll wish things could be different, but at least Oscar, Kim and Drew Cain (Billy Miller) have lots of support right now.

Other General Hospital spoilers say Willow Tait (Katelyn MacMullen) will get visibly uncomfortable around Brad Cooper (Parry Shen). That’ll leave Harrison Chase (Josh Swickard) confused about what their deal is. Chase will wonder if Willow has a problem with Brad, but she’ll likely downplay the issue. Willow has spilled part of her story to Chase, but she may think it’s too risky to spill anything more.

Over with Lulu Falconeri (Emme Rylan), she’ll make her way home with Spencer Cassadine (Nicolas Bechtel) by her side. Once they walk through the door, Nina Reeves (Michelle Stafford) and Charlotte Cassadine (Scarlett Fernandez) will pop out with a welcome home sign along with balloons. They’ll nearly give poor Lulu a heart attack, so it’s lucky she won’t land back at GH over this!

In lockup, Franco Baldwin (Roger Howarth) will be appalled by Jordan Ashford’s (Briana Nicole Henry) plan. She wants him to plead guilty and perhaps do a little boasting to draw the real killer out. However, Franco will have major concerns about that plot.

For starters, Franco’s already been telling everyone he’s innocent. He’ll worry about what’ll happen if Jordan’s plot fails and he’s stuck with conflicting stories. Jordan will undoubtedly assure Franco that she can take care of all that. She’ll just need him to do his part and take credit for the murders.

That brings us to the next snag for Franco. He’ll get all riled up at the thought of claiming he killed Kiki Jerome (Hayley Erin). Franco will tell Jordan that he just can’t do that, but she’ll probably turn it around and point out that it’s a step toward justice.

General Hospital spoilers say Franco will finally consider the idea, but he’ll want to get Elizabeth Webber’s (Rebecca Herbst) approval first. Jordan will insist that’s not going to happen. She’ll contend that Liz can’t know what they’re up to. Franco will ultimately agree to Jordan’s strategy, so Liz will face a shocker at his arraignment later this week!

Until then, Ryan Chamberlain (Jon Lindstrom) will confront Dr. Kevin Collins (Jon Lindstrom) about his prenup lie. Thanks to Ava Jerome’s (Maura West) surprise over the prenuptial agreement, Ryan’s finally getting the picture. He’s figured out that Kevin manipulated him, so he’ll return to Ferncliff and chew his brother out.

Of course, Laura Webber (Genie Francis) also knows something’s up now. She played it cool over the bizarre prenup mention, but she secretly plans to follow “Kevin.” It won’t be long until she discovers a captive Kevin and faces consequences because of it.

General Hospital has some exciting scenes in store for us. We’ll keep you posted as other GH news comes in. Stay tuned to the ABC soap and don’t forget to check CDL often for the latest General Hospital spoilers, updates and news.