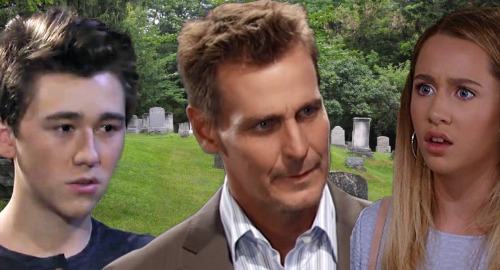 General Hospital (GH) spoilers tease that Oscar Nero’s (Garren Stitt) reprieve will indeed be temporary. At GH, Dr. Terry Randolph (Cassandra James) made that clear to Drew Cain (Billy Miller) and Dr. Kim Nero (Tamara Braun). She didn’t want them getting their hopes up about a lengthy future for Oscar, but at least he’s got a little more time than they previously anticipated.

Oscar will spend that time bonding with his parents as well as Josslyn Jacks (Eden McCoy). She’s also thrilled about some extra days with her boyfriend, but the clock will keep ticking and Oscar’s tumor will eventually grow again. Once Oscar’s next appointment rolls around, his tests may not bring good news.

It seems likely that the reprieve will be over by then, so Oscar will be reminded of his grim fate. General Hospital spoilers say Oscar will have to really get serious about this. He’s been having fun with his bucket list, so it’s nice that he’s living in the moment and experiencing all life has to offer. However, Oscar will ultimately have to put the fun aside and focus on his goodbyes.

You can bet that’ll be the toughest part. Josslyn is dreading her final farewell to Oscar and so are his parents. Kim and Drew are sure to be devastated over this tragic loss. They’ll inevitably lean on each other for support, but what about Joss? She’ll thankfully have a support group of her own.

Carly Corinthos (Laura Wright), Sonny Corinthos (Maurice Benard), Michael Corinthos (Chad Duell) and Cameron Webber (William Lipton) will all be in Josslyn’s corner. Of course, there’s one more person who could provide some necessary comfort. General Hospital just announced that Jasper “Jax” Jacks is headed back to GH, so Josslyn’s suffering should be at least part of why he returns.

Since Joss will naturally spin out over Oscar’s death, she’ll certainly lean of her dad during the aftermath. Jax might even show up beforehand as Joss watches her love fade away. Josslyn loves Oscar and wishes they could have a future together, so letting go of all their dreams is going to be brutal.

In a video about his comeback, Rademacher pointed out that Jax’s legacy would continue “in a big way.” Perhaps that means this return stint will be long-term or at least more than just a handful of episodes. It’s hard to do anything big without some airtime behind it, so Jax may be sticking around for a while.

A recent Soap Opera Digest blind item revealed that a fan favorite would return for a limited run. That could potentially line up with Jax on GH. A limited run obviously isn’t forever, but it’d be more than just a blink-and-you’ll-miss-it visit. Then again, this blind item could be about someone else entirely. It’s just worth speculating on since the length of Jax’s stint is still unknown.

Regardless, Jax is a loving father and wouldn’t want Josslyn to endure such deep heartache without him. Joss will lose Oscar, but she’ll gain the presence of her dad in Port Charles. That’ll mean the world to her during such a dark time.