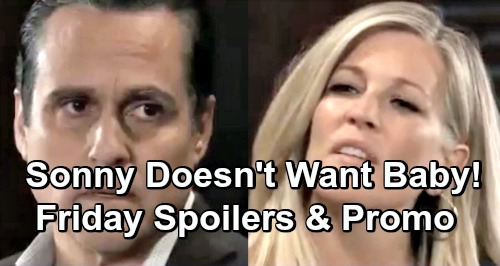 General Hospital (GH) spoilers for Friday, February 15, tease that Sonny Corinthos (Maurice Benard) will try to wrap his head around Carly Corinthos’ (Laura Wright) revelation. After a romantic Valentine’s Day evening, Carly dropped the baby bomb. She’s pregnant, but she believes they can handle anything that life throws their way.

Unfortunately, Sonny’s reaction will leave Carly concerned. She’ll question if he wants this child, but he’ll probably point out that he’s just trying to process the news. It’s fair for Sonny to take a minute to catch his breath! He’s already a grandfather, so starting over with a baby is a big deal. Then again, Avery Corinthos (Ava and Grace Scarola) is still quite young. Why not add one more, right?

Sonny should find a way to be happy about this soon enough. In the meantime, Maxie West (Kirsten Storms) will be determined to find out more info. Thanks to Peter August (Wes Ramsey), Maxie’s starting to put the fake daughter puzzle pieces together. She doesn’t know Sasha Gilmore (Sofia Mattsson) is a fraud yet, but she knows Valentine Cassadine’s (James Patrick Stuart) secret involves her.

Maxie will insist that they have to crack this case for Nina Reeves’ (Michelle Stafford) sake. She won’t want Nina facing any more heartache. For now, Sasha will fret about Dr. Griffin Munro’s (Matt Cohen) state of mind. She’ll wish she could help lift him out of the funk he’s been in since Kiki Jerome’s (Hayley Erin) death.

Other General Hospital spoilers say Jordan Ashford (Briana Nicole Henry) will mention her plan to Curtis Ashford (Donnell Turner). She’ll admit that law enforcement wouldn’t exactly call it orthodox! Jordan will decide to rope Franco Baldwin (Roger Howarth) into pleading guilty and helping her flush out the real killer. However, she’ll give him a chance to walk free before he signs up.

Jordan will want Elizabeth Webber (Rebecca Herbst) kept out of the loop, so this is sure to be a tough choice for Franco. He’ll hate the idea of lying to Liz and messing with her faith in him. Nevertheless, Kiki’s murderer needs to go down and the rest of Port Charles needs to be protected. It’s up to Jordan and Franco to put the menace away.

General Hospital fans know that menace is Ryan Chamberlain (Jon Lindstrom), but Ava Jerome (Maura West) will remain in the dark on Friday. She’ll share some passionate moments with Ryan in Dr. Kevin Collins’ (Jon Lindstrom) office at GH. Ava is falling harder for Ryan every day, so that should make her pain even worse when the killer secret inevitably blows up.

Over with Lulu Falconeri (Emme Rylan), she’ll tell Laura Webber (Genie Francis) that Franco’s going to get what’s coming to him. Lulu fully believes Franco is guilty, so she’s in for a huge shock whenever the real story is brought to light. We’ll give you updates as other GH details emerge. Stay tuned to the ABC soap and don’t forget to check CDL often for the latest General Hospital spoilers, updates and news.