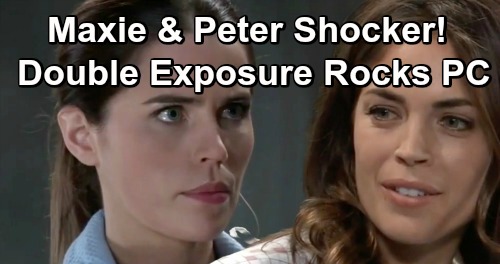 General Hospital (GH) spoilers tease that Peter August (Wes Ramsey) and Maxie West (Kirsten Storms) could blow the lid off two major secrets. GH could be gearing up for a double bombshell in the Sasha Gilmore (Sofia Mattsson) storyline. Let’s look at what we know so far.

Valentine Cassadine (James Patrick Stuart) was desperate to win back his love and give Nina Reeves (Michelle Stafford) the child she’d always dreamed of. He rigged the DNA tests to make sure Sasha was a match for Nina. Valentin even roped an unsuspecting Curtis Ashford (Donnell Turner) into this to make it look legit.

However, Liesl Obrecht’s (Kathleen Gati) involvement has thrown Valentin a real curveball. She’s making demands right and left, but that’s not even the worst part. Valentin counted on Peter to be discreet about the favors he was doing. Instead, he blabbed to Maxie and now they’re both on the verge of a stunning discovery!

General Hospital spoilers say Peter and Maxie will team up to seek the truth. They know Liesl must have leverage if Valentin’s bending over backwards for her. Since they assume that leverage involves Sasha, they’re already so close to the fake daughter shocker. It shouldn’t be too hard for them to solve this mystery.

Maxie may steal a glass from Sasha and Nina at some point. She might order a DNA test of her own and confirm that they’re not a mother-daughter duo. Naturally, Maxie would have some reservations about divulging that. She’d realize it would break Nina’s heart, but she’d also hate for Valentin to keep manipulating Nina.

The same goes for Sasha, who could have an even worse agenda as far as Maxie knows. Since Sasha can’t be trusted either, Maxie may believe she has no choice but to reveal what she’s learned. Peter has seen the damage lies can do, so might support that decision or even talk Maxie into it.

Regardless, two more people are nearly in the loop. Maxie and Peter are sure to be a threat that Valentin never saw coming. Of course, the drama may not stop there. We mentioned this could turn into a double bombshell and that could certainly be the case.

General Hospital continues to highlight the fact that Sasha looks so much like Britt Westbourne (Kelly Thiebaud). Are they dropping hints about a huge twist? Peter and Maxie may uncover one more shocker as they seek the real story. Perhaps Peter will research Sasha’s background and determine that she’s related to Nina after all – just not as her daughter.

Whether Sasha is a long-lost child of Liesl’s or was given up for adoption by a young Britt, maybe GH will keep it all in the family! We’ll give you updates as other news comes in. Stay tuned to the ABC soap and don’t forget to check CDL often for the latest General Hospital spoilers, updates and news.