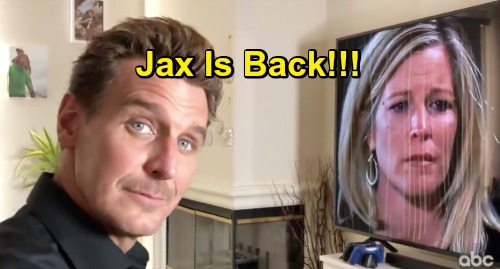 General Hospital (GH) spoilers tease that Josslyn Jacks (Eden McCoy) will face some huge surprises. One of them will involve her father’s return to Port Charles! Jasper “Jax” Jacks (Ingo Rademacher) is making a comeback, so that’s something for both Joss and GH viewers to look forward to.

The show announced the fantastic news in a fun throwback Thursday video on social media. The clip was a remixed version of Jax’s heartbreaking goodbye, but it came with a suggestion to watch it all. It turns out there was an excellent reason why.

During the final minute of the video, Rademacher stopped the clip on a TV behind him. He feigned outrage and made the announcement his fans had been waiting for. Rademacher said, “Oh, come on! Well, that can’t be the end…because it’s not. I’m coming back to General Hospital and Jax’s legacy is going to continue in a BIG way.”

GH is staying tight-lipped about the details of Jax’s comeback storyline, but it sounds like he’ll bring some great drama. The timing is interesting since Carly Corinthos (Laura Wright) is pregnant with Sonny Corinthos’ (Maurice Benard) baby. The couple seems solid, so maybe Jax will find a new love while he’s back in town. It’d be nice to see Jax find happiness with someone special.

Of course, Josslyn will be thrilled to have her dad around. She’ll certainly need Jax’s support thanks to Oscar Nero’s (Garren Stitt) terminal diagnosis. Jax’s presence in Port Charles could help Joss through the difficulties that lie ahead. There’s even a chance Jax will be called to handle Josslyn’s wild side if she spirals out of control. That could easily happen once she’s faced with the crushing grief of losing Oscar.

Whatever the case, General Hospital spoilers say Jax will make quite a splash with his return. He’ll undoubtedly shake things up for several Port Charles residents, so GH watchers will be eager to see what’s in store. There’s no word yet on how long Jax will be in PC for, but we’ll take as much Jax as we can get!