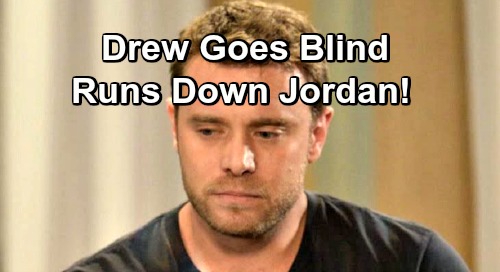 General Hospital (GH) spoilers tease that Drew Cain (Billy Miller) will face a total nightmare. He’ll cause a shocking accident, so GH fans can expect plenty of drama. Drew will inadvertently run Jordan Ashford (Briana Nicole Henry) down with his car, which should leave her in a fight for her life. That means this will certainly be a nightmare for Jordan, too. Her loved ones will worry she may not survive.

Curtis Ashford (Donnell Turner) will be worried sick when he hears that Jordan’s been struck. He’ll wonder how this could’ve happened. There’s an easy explanation for that, and it doesn’t involve Drew being careless in his vehicle. Instead, it looks like Drew’s sudden blindness will be to blame.

GH viewers will recall that the identical twins in Port Charles have been struggling with a mysterious virus. Anna Devane (Finola Hughes) was the first to have an extreme headache, briefly lose consciousness and wake up without her sight. We can imagine Alex Devane Marick (Finola Hughes) went through the same thing wherever she may be.

Ryan Chamberlain (Jon Lindstrom) experienced the same shocking symptoms and later received word that Dr. Kevin Collins (Jon Lindstrom) had as well. Naturally, that made us wonder when it’d be Drew and Jason Morgan’s (Steve Burton) turn to face a blindness bomb. Since we knew the other twins are being affected, it was just a matter of time until Jason and Drew suffered the same fate.

General Hospital spoilers say it won’t be Drew’s fault, but he’ll still battle remorse over Jordan’s ordeal. Of course, he’ll also have to fret about his sight. The surgery worked on Anna and Ryan, but there are no guarantees with this sort of thing. Drew will just hope his sight can be restored. He’ll hate dealing with this hurdle when he’s supposed to be savoring his time with Oscar Nero (Garren Stitt).

Curtis will watch over Jordan, but he’ll undoubtedly check on his buddy as well. He surely won’t hold Drew responsible for this. Curtis should be concerned about both Jordan and Drew since they’re very important people in his life. He’ll hope Drew’s blindness can be corrected and hope that Jordan can make a full recovery.