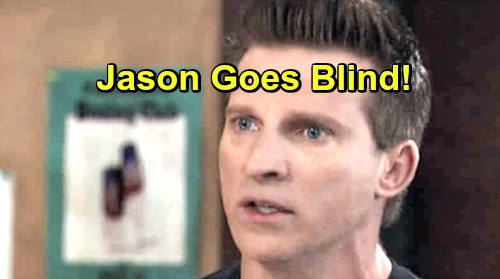 General Hospital (GH) spoilers reveal that some shocking clues are surfacing in the mysterious virus storyline. Let’s consider what we know so far. Anna Devane (Finola Hughes) lost her sight thanks to a rare virus that’s only seen outside of North America. That immediately led to puzzling concerns.

Dr. Hamilton Finn (Michael Easton) pointed out that they have no way of knowing when Anna contracted it. This virus may have been in Anna’s system for years without symptoms. Of course, Anna’s wondering why she suddenly went blind now, but that’s just one part of the mystery. The bigger question is why Ryan Chamberlain (Jon Lindstrom) apparently has the same virus.

Ryan just lost his sight as well, so these incidents have to be connected. It can’t be a coincidence, so Anna will hope Ryan’s ordeal can help her get answers. However, to really get to the bottom of this, we have to consider some crucial General Hospital spoilers. Jason Morgan (Steve Burton) will become part of this story, so that makes us think he might go blind, too.

GH fans will see a surprising obstacle for Sam McCall (Kelly Monaco) and Jason soon. They’ll make love and move their romance forward later this week, but it won’t be long until they hit a snag. This hurdle won’t be something they ever expected, so sudden blindness for Jason makes sense.

Now consider the two virus victims we already know about and the one that may be coming up. Anna, Ryan and Jason…what do those three seemingly unrelated characters have in common? They’re all identical twins!

Peter August (Wes Ramsey) even brought up Alex Devane (Finola Hughes) just before Anna passed out and woke up without her vision. That’s just one more clue the show has given us.

Next, we have to determine why the fact that they’re twins is significant. The memory-mapping drama may tie in here somehow. It’s possible Cesar Faison (Anders Hove) was the mastermind of this virus.

Even if Anna and Ryan weren’t mystery patients long ago, there could’ve been some other experimental tactic Faison was pushing for. Perhaps Faison recruited someone to secretly give this virus to the twins with a connection to Port Charles. Some other crazy consequences could come from this.

Regardless, that “outside North America” comment could point to the Russian clinic. General Hospital spoilers say Robert Scorpio (Tristan Rogers) will do his best to crack the case in the coming weeks. Rogers’ own comments line up with a potential memory-mapping link. On Twitter, Rogers shared his first airdate back and offered a reminder to GH viewers.

“My next air date is Friday (January) 25,” Rogers said. “Remember this is a continuation from last year.” Rogers himself indicated that it’ll have some connection to what’s played out already, so it should be interesting to see how the puzzle pieces fit. We’ll give you updates as other GH news comes in. Stick with the ABC soap and don’t forget to check CDL often for the latest General Hospital spoilers, updates and news.