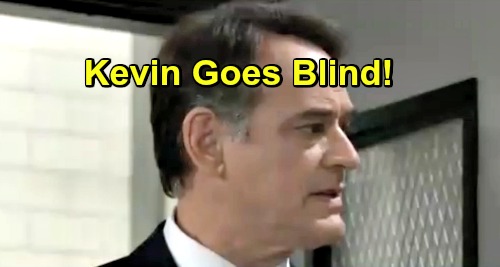 General Hospital (GH) spoilers tease that Ryan Chamberlain (Jon Lindstrom) will unleash his fury. A Ferncliff crisis will really set him off, so let’s talk about what he’ll find when he gets there. Ryan received several messages about an emergency at the facility, but he was busy with his surgery and another Lulu Falconeri (Emme Rylan) murder attempt. Once he finally called back, he was stunned by what he learned.

When Ryan rushes over to Ferncliff, we’ll see that the other twin as dropped. Ryan recently keeled over with a blinding headache, so it was Dr. Kevin Collins’ (Jon Lindstrom) turn to do the same. On January 30, Ryan will demand answers from a flustered nurse. He’ll want to know how she could let this happen.

Of course, Ryan won’t mean the blindness itself. There’s no way a nurse or anyone else could’ve prevented that. Ryan will undoubtedly be talking about the aftermath of “Wilson Ritter’s” ordeal. The staff had to handle it without Ryan’s help, so they may have made some wrong choices in his opinion.

It’s possible Kevin has been taken to Mercy Hospital, the other hospital in town. That could leave Ryan in a real bind as he scrambles to keep a lid on his twin swap plot. Then again, Ryan may misunderstand at first.

Kevin might’ve been sent for an examination or an MRI somewhere within the Ferncliff building. Regardless, Ryan may have to cover his tracks if people start asking for more of “Wilson’s” medical info.

However, General Hospital spoilers suggest Ryan will get a grip on the situation eventually. He’ll end up asking Kevin about Dr. Cabot and the DVX project. Ryan may admit that he also went blind and had his sight restored through surgery.

Kevin will certainly want the surgery as well, but Ryan may hinder that plan. He might convince the staff that he consulted with GH’s medical team and determined that nothing could be done. After all, the Ferncliff crew has no clue what caused the blindness or if it can be cured. They just trust whatever Ryan tells them since he seems to be the esteemed Dr. Collins.

A blind Kevin would add an extra advantage for Ryan, who always has to worry about keeping his brother locked up. Ferncliff definitely isn’t the most secure place in the world, so this would be a big load off his mind. If Kevin can’t see to find his way out, that would help Ryan tremendously.

Ryan doesn’t want to risk sending Kevin somewhere off site for surgery, so just leaving Kevin blind might be his best bet. General Hospital spoilers say Kevin will be furious on Wednesday, which would line up with that idea.

Nevertheless, Kevin could have some leverage. He might be willing to offer Dr. Cabot and DVX project answers, but he’d want something in return – like the surgery to restore his sight.

The problem is that Ryan’s already got the ultimate leverage here. He’s fine with killing people Kevin cares about if his demands aren’t met. It’s sure to be a tricky twin battle, so General Hospital fans will want to stay tuned. We’ll give you updates as other GH news comes in. Stick with the ABC soap and don’t forget to check CDL often for the latest General Hospital spoilers, updates and news.