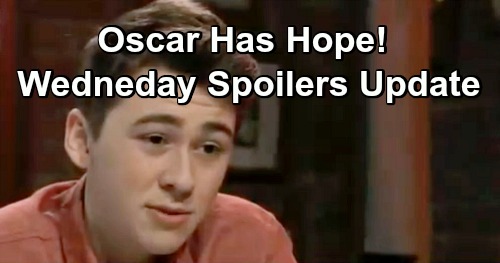 General Hospital (GH) spoilers for Wednesday, January 30, tease that Lucas Jones (Ryan Carnes) will have a lot on his mind. Brad Cooper (Parry Shen) will immediately pick up on the somber vibe and wonder what’s up. Of course, whatever Lucas divulges could intensify Brad’s fears.

Perhaps Lucas will start thinking about “Wiley” Cooper-Jones’ birth mom and how it would’ve been beneficial for her to know him. If that’s the case, Brad obviously won’t think so! Regardless, Lucas will end up chatting with Bobbie Spencer (Jackyln Zeman) later. She’ll give him some good advice, so Lucas’ spirits should be lifted.

At Charlie’s Pub, Michael Corinthos (Chad Duell) will spend the day with his godson. He’ll happily babysit “Wiley,” but he’ll make it clear that Julian Jerome (William deVry) should keep his distance. Michael probably should’ve chosen another place to eat if he wanted that, but he’ll give Julian a warning anyway.

Speaking of warnings, Julian will give one to Brad on Wednesday. He’ll insist that Brad has to do whatever it takes to keep Willow Tait (Katelyn MacMullen) out of “Wiley’s” orbit. They can’t have her asking too many questions or coming up with reasons to stir up trouble.

Julian will also urge Willow herself to back off. They’ll stare each other down at the bar and rehash their agreement. Julian vowed to stay out of “Wiley’s” life and Willow did the same by going with an anonymous adoption agreement. Since Julian’s kept his promise, he’ll ask if Willow intends to keep hers, too. He’ll definitely worry about Willow sniffing around and learning too much.

Other General Hospital spoilers say Anna Devane (Finola Hughes) will make a surprising suggestion. Since Robert Scorpio (Tristan Rogers) will doubt Anna’s claims, she’ll offer to take a lie detector test. Anna won’t want there to be any uncertainty when it comes to her side of the story. She’ll be adamant that she had nothing to do with Dr. Cabot, so Robert probably won’t force her to take the test.

Instead, Robert may choose to trust Anna and focus on why her story doesn’t agree with his notes. GH may be working the twin angle here. Alex Devane Marick (Finola Hughes) might’ve been the one who actually worked with this mysterious doc. She could’ve impersonated Anna back then, which would explain why Anna’s name ended up in all the documents.

Over with Drew Cain (Billy Miller), he’ll encourage Dr. Kim Nero (Tamara Braun) to have dinner with him. They’ve been dealing with a lot of deadly drama, so they could use a night off from worrying. Kim and Drew can’t completely cut out their concerns, but they can at least share a few laughs and bond over a meal.

While Kim mulls over the offer, Oscar Nero (Garren Stitt) will sense that his parents are headed for a reunion. He’ll tell Josslyn Jacks (Eden McCoy) about Drew and Kim’s growing connection, so she should be happy for all of them. Oscar may find comfort in the possibility of his parents getting back together and being there for each other after his death.

General Hospital spoilers say more Ferncliff chaos is ahead as well. Ryan Chamberlain (Jon Lindstrom) will explode over the way the staff handled an emergency. It looks like they may have called for outside backup after “Wilson Ritter” aka Dr. Kevin Collins (Jon Lindstrom) went blind.

Ryan’s patient may be out of his hands briefly, so he’ll struggle to contain the crisis and keep his scheme under wraps. We’ll give you updates as other GH news comes in. Stick with the ABC soap and don’t forget to check CDL often for the latest General Hospital spoilers, updates and news.