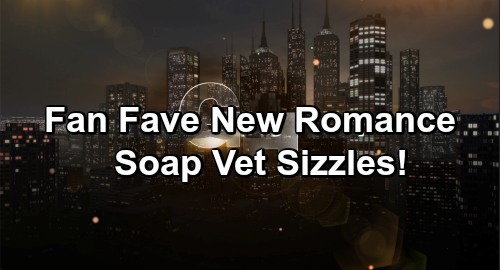 General Hospital (GH) spoilers tease that a blind item points to a fresh love story for a long-term character. This info could be about any of the four soaps, but GH seems like a strong contender. According to Soap Opera Digest, “one veteran fan fave will be getting a new love interest.”

If this is indeed about General Hospital, there are some great options to consider. The first one is Laura Webber (Genie Francis). GH made a huge mistake by abruptly firing Francis, so they’ve done everything they can to make it right. For starters, they put Laura at the center of a hot story with Ryan Chamberlain (Jon Lindstrom), who’s posing as “Dr. Kevin Collins.”

Plus, Laura recently won the election and is now Port Charles’ mayor. She’s even been at the heart of Lulu Falconeri’s (Emme Rylan) latest ordeal. A stabbed Lulu stumbled down from her office so she could get help from her mom.

It’s clear that General Hospital’s making an effort to give Laura solid storylines and make her a useful character.

Could the next step be giving Laura a new love interest? It may not be so easy for Laura to forgive Kevin after the truth comes out. It’s his fault that Ryan was able to run amok like this.

Kiki Jerome (Hayley Erin) died and Lulu could’ve, too. So much damage has been done, so Laura may wonder what Kevin was thinking.

It was terribly risky to try and rehabilitate his deranged brother. Ryan should’ve been at a mental institution far, far away from Port Charles. Kevin shouldn’t have gotten mixed up in all this.

Laura’s reached a place of acceptance when it comes to “Kevin,” so turning her feelings back on for the real one may be tough. If a reunion isn’t possible, Laura could certainly be the one getting a new love interest.

However, there are other possibilities to consider. Sam McCall (Kelly Monaco) might be one. She intends to get closer to Shiloh Archer (Coby Ryan McLaughlin) as part of a scheme. Could real love bloom instead?

Sam just got her reunion with Jason Morgan (Steve Burton) back on track, but there’s no guarantee it’ll stick. Even Jason could be the veteran fan favorite turning to someone new.

Of course, other characters like Sonny Corinthos (Maurice Benard) or Anna Devane (Finola Hughes) might be options as well. If GH decides their current romances are too stale, they could always mix it up a little. Change can be good sometimes!