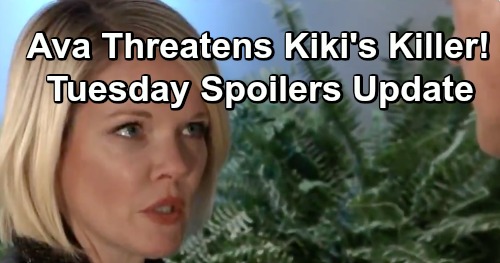 General Hospital (GH) spoilers for Tuesday, January 29, tease that Ava Jerome (Maura West) will hope for the serial killer’s identification. Once she learns Lulu Falconeri (Emme Rylan) is awake and on the mend, Ava will trust that Kiki Jerome’s (Hayley Erin) murderer will be brought to justice. She’ll be eager to see this violent monster’s downfall.

However, Ryan Chamberlain (Jon Lindstrom) will skate by for now. Lulu can’t remember that Ryan launched the attack in her office, so she’ll be upset about her memory loss. General Hospital spoilers say Lulu will get emotional as she insists that she has to remember. She’ll hate the idea of the killer claiming another victim or getting away with his other crimes.

Laura Webber (Genie Francis) will see that Lulu’s getting herself all worked up, so she’ll quickly intervene. She’ll push Lulu to concentrate on her recovery and just hope her memories will come back later. Across town, Sam McCall (Kelly Monaco) and Jason Morgan (Steve Burton) will go over the plan. Jason was surprised when Sam said they had to break up, but she’s not actually dumping him.

General Hospital spoilers say they’ll simply agree to keep their reunion quiet. Sam will insist on beating Shiloh Archer (Coby Ryan McLaughlin) at his own game, so that means pretending she’s single and getting cozy with him. Jason will may have his doubts at first, but he’ll ultimately get on board. They have to protect Kristina Corinthos-Davis (Lexi Ainsworth) and show everyone Shiloh’s true colors.

Until then, Shiloh will make his position clear to Kristina. He’ll maintain that the most important thing is regaining Kristina’s trust. Kristina was furious after Daisy (Kelsey Wang) confessed to sending the obituary to Sam and targeting her with emails. She claims her motives were pure, but Kristina is struggling to accept all this.

Of course, Shiloh is pushing for forgiveness and hoping Kristina won’t turn her back on Dawn of Day. She’ll most likely follow his lead and suggest that she’ll give Daisy another chance. Kristina definitely doesn’t blame Shiloh, so trusting him won’t be a problem.

Elsewhere, Curtis Ashford (Donnell Turner) will get a lecture from his auntie. Stella Henry (Vernee Watson) won’t appreciate it when Curtis starts making assumptions about her personal life. She’ll feel like he’s overstepping when it comes to Marcus Godfrey (Nigel Gibbs), so Curtis may get a warning to back off.

Other GH spoilers say Carly Corinthos (Maura Wright) will explain Sonny Corinthos’ (Maurice Benard) actions. It looks like things will get a bit heated during a chat with Dr. Griffin Munro (Matt Cohen). Griffin may not approve of how Sonny’s handled Mike Corbin’s (Max Gail) care. Sonny has been putting off Mike’s full-time Turning Woods status for far too long, so that could be an issue.

Still, Sonny’s heart is in the right place. He’s just been trying to bond with his father for as long as possible, but he knows he has to let go. Carly will assure Griffin that Sonny isn’t Mike’s adversary. Sonny has done everything in his power to keep Mike comfortable, but the Turning Woods staff will be doing that from now on.

GH fans won’t want to miss Tuesday’s exciting episode. We’ll give you updates as other news comes in. Stick with the ABC soap and don’t forget to check CDL often for the latest General Hospital spoilers, updates and news.