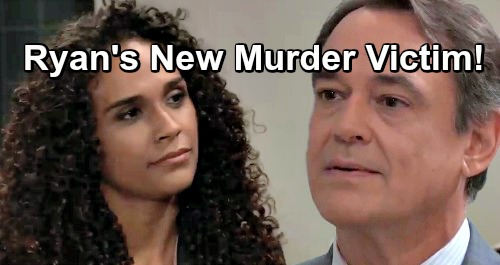 General Hospital (GH) spoilers tease that Ryan Chamberlain (Jon Lindstrom) will keep dodging bullets. Lulu Falconeri (Emme Rylan) doesn’t remember that Ryan was the one who attacked her. She also doesn’t realize Ryan made another attempt on her life with that suffocation attempt. Since Lulu’s memory will seem totally blocked, Ryan will slowly let his guard down again.

Of course, that’s a terrible plan if he wants to keep the deadly drama going. Getting too cocky is a surefire way to get caught! Nevertheless, Ryan is a confident man and sliding by without consequences will only make him more confident. He’ll feel like his brilliant mind is no match for the cops.

Even so, Ryan will still want to eliminate the pesky PCPD as a threat. He’ll decide he needs to pin the murders on someone else, so that’s where Franco Baldwin (Roger Howarth) will come in. General Hospital spoilers say Ryan will try to use Franco’s violent past against him. He’ll hope to frame Franco for his reign of terror and put this mess behind him.

Once Ryan does that, he’ll intend to build a twisted life with Ava Jerome (Maura West). He’ll think it’s a foolproof setup scheme, but there’ll be a big problem. General Hospital spoilers say Jordan Ashford (Briana Nicole Henry) will form a desperate plot of her own. She’ll hope she can flush the serial killer out and finally take this maniac down.

Naturally, that’ll involve some sort of trap. Jordan knows she’s dealing with a smart criminal, so she’ll have to be just as smart about her bait. GH fans can expect Ryan to pick a shocking new victim on February 8. Will it be one he comes up with on his own or will it be an idea planted by Jordan?

A publicity stunt might nudge Ryan in the direction Jordan wants him to go. She could reveal something at a press conference and hope it leads the killer toward her ploy. Whatever the case, this sounds like a dangerous situation for all parties involved!

Who will end up with the most regrets? We’ll give you updates as other GH news comes in. Stay tuned to the ABC soap and don’t forget to check CDL often for the latest General Hospital spoilers, updates and news.