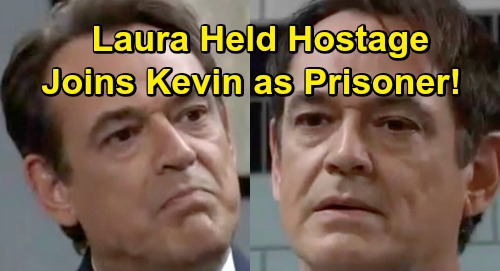 General Hospital (GH) spoilers tease that Laura Webber’s (Genie Francis) suspicions will rev up again. She doesn’t trust “Dr. Kevin Collins,” which is good since he’s actually Ryan Chamberlain (Jon Lindstrom)! Laura has every reason to be wary of the man in front of her. She’ll decide to trust her instincts and get some answers during the week of February 18-22.

GH fans can expect Laura to follow Ryan. He’ll want to pay the real Dr. Kevin Collins (Jon Lindstrom) a visit, presumably to gloat again or seek more information. Knowing Ryan as well as we do, it’ll probably be a bit of both. General Hospital spoilers say Laura will be hot on Ryan’s trail as he arrives at Ferncliff. She’ll hang back and try to figure out what “Kevin” is up to.

As Laura approaches Kevin’s room, he’ll immediately sense her presence. Ryan feels nothing for Laura, but Kevin is connected to his love on an incredibly deep level. GH viewers will recall that Kevin is still blind, but it won’t matter. He’ll know without a doubt that Laura is nearby, so he’ll be overwhelmed by his emotions.

Part of Kevin will be glad that Laura has arrived and could potentially help him. Just having someone he loves near him will mean in the world in that moment. However, Kevin will also fret about the threat Ryan poses. He may warn Laura to get out of there and notify the authorities. Kevin won’t want Laura to become the next corpse Ryan leaves behind.

It turns out Laura will indeed become a victim, but she won’t face the same grim fate as Kiki Jerome (Hayley Erin). Instead, General Hospital spoilers say Laura will be held hostage with Kevin at Ferncliff! Ryan will lock Laura up and try to deal with this surprising hurdle in his twisted plot. He’ll undoubtedly think this is better than leaving a bloody mess that could be traced back to him.

Kevin will have a chance to reunite with Laura and offer an explanation. He’ll be sorry he ever thought he could fix Ryan, but the most important thing will be finding an escape route. There’ll be time to discuss all that after they find a path to freedom.