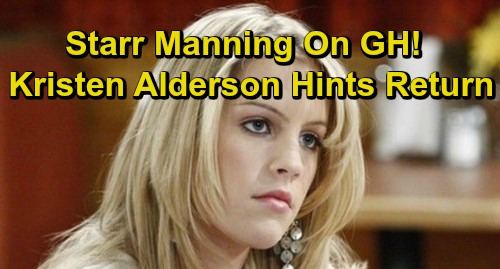 General Hospital (GH) spoilers reveal that fans are gearing up for some big comebacks. Dominic Zamprogna’s return as Dante Falconeri has been confirmed along with Ingo Rademacher’s return as Jasper “Jax” Jacks. Of course, there’s always room for more fan favorites! Another GH alum sent out an intriguing tweet that’s left many viewers excited.

GH fans know that Kristen Alderson played Kiki Jerome before Hayley Erin stepped in as a recast. Before that, Alderson portrayed Starr Manning, a character who first appeared on One Life to Live. A Prospect Park lawsuit led to Starr being written out of General Hospital, which is why Alderson was given the role of Kiki.

On Twitter, Alderson made an announcement that relates to GH. She teased, “Guess what?? I’m doing something realllly fun today & it has to do with @GeneralHospital Any guesses!?” Could Alderson have had a meeting about a General Hospital comeback? Could she be returning to Port Charles in some form?

Unfortunately, Kiki has been killed off and probably won’t be revived with any wacky explanation – at least not anytime soon. Never say never since this is a soap, but GH probably wants to milk all the drama they can out of Kiki’s death. We’re rapidly approaching the final chapter of the serial killer saga, so Kiki’s murder will be an important part of that.

Ava Jerome’s (Maura West) lover is “Dr. Kevin Collins” aka Ryan Chamberlain (Jon Lindstrom), the man who murdered her daughter. General Hospital needs Kiki to stay dead for Ava’s revenge storyline, which should be coming up soon. That means Kiki’s return isn’t likely right now or maybe even ever. It all depends on how crazy they might get with a back-from-the-dead plot down the road.

However, the Prospect Park lawsuit was settled and that leaves the door wide open for Starr’s comeback. Could that be what Alderson was at GH for? If she’s in talks to reprise the role, that would certainly thrill Starr fans.

Then again, there’s a chance Alderson was meeting with General Hospital about portraying a new character. It might be interesting to see Alderson hit PC as someone fresh and full of possibilities. Regardless, GH viewers are eager to find out what this announcement’s all about. Let’s hope Alderson divulges her secret soon!

Happy Valentine’s Day everyone!! Guess what?? I’m doing something realllly fun today & it has to do with @GeneralHospital 😜😁 Any guesses!?