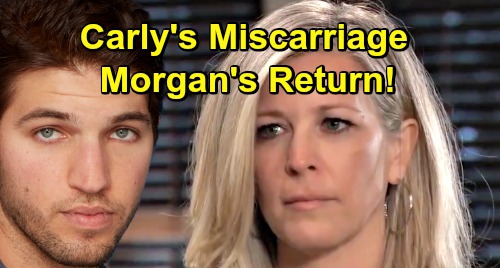 General Hospital (GH) spoilers tease that Carly Corinthos (Laura Wright) and Sonny Corinthos (Maurice Benard) could be headed for more heartbreak. After Carly revealed she was pregnant, Sonny was in a state of disbelief. Carly admitted that two home pregnancy tests had confirmed the news, but she still needs a doctor to back that up.

Sonny’s concerned about Carly in more ways than one. For starters, he knows Carly’s health could be in jeopardy due to this baby. Carly’s last pregnancy brought risks, so he’s worried Carly could have a stroke and die. There’s also the issue of this baby potentially reminding Carly of Morgan Corinthos (Bryan Craig) and the loss she faced. Carly’s grief could return in a big way.

This whole pregnancy storyline seems strange and completely out of the blue. What’s GH up to? Are they really going to give Carly and Sonny another kid? It’s possible, but there are other options here, too. There’s always a chance that Carly’s got some medical issue that’s bringing up a false positive.

However, this may be General Hospital’s plan to drag Carly and Sonny down before they ultimately lift them up. Things get to get awfully dark on soaps just before the light comes. Sonny has already faced a tough time watching Mike Corbin (Max Gail) slip away and that’s only going to get worse.

Plus, General Hospital spoilers say Dante Falconeri (Dominic Zamprogna) is headed back to GH to wrap up his arc. That doesn’t sound good in terms of Dante’s fate. Since Zamprogna isn’t returning for a long-term stint, the show may be bringing him back to kill him off.

Since Carly could be facing such a risky pregnancy, she may lose the baby as well. What if “CarSon” face the loss of Mike, Dante and their unborn child all in a row? Their marriage could be left hanging by a thread. They could nearly be torn apart by all the mourning and heartache. What could possibly lift them out of that pit of despair? Morgan’s return from the dead would do the trick.

A recent Soap Opera Digest blind item revealed that a high-profile character would be making a comeback. That could be Adam Newman over on The Young and the Restless since they’re recasting the character. Then again, this blind item could’ve been referring to a Morgan recast instead. Even if it wasn’t, that option’s always on the table. Presumed deaths leave the door wide open for a return.

There was certainly a lot of Morgan talk in Sonny and Carly’s pregnancy discussion. Maybe too much to ignore! Are we seeing the first rumblings of Morgan’s comeback storyline? We’ll give you updates as other GH details emerge. Stay tuned the ABC soap and don’t forget to check CDL often for the latest General Hospital spoilers, updates and news.