The Young and the Restless Spoilers: Michael Muhney’s Rehire As Adam Newman – Ratings To Soar As Shadam Reunite? 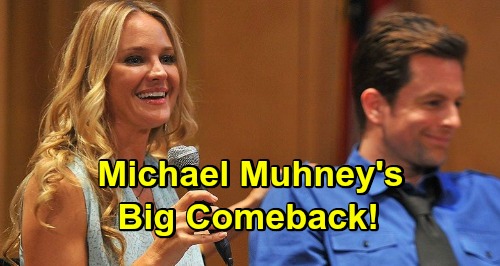 The Young and the Restless (Y&R) spoilers tease that Michael Muhney’s rehire as Adam Newman would become the top soap opera related news story of this decade. All contributing factors would combine to drive this event to epic heights.

Soaps have often brought back former actors to reprise a role once played. But Muhney’s stunning release became a major lesson in how modern smears happen when he was let go from Y&R in December 2013.

Using uncorroborated, invented information, those who weren’t in any way connected to Muhney, or to the show, spread misinformation about the actor, his castmates, and TPTB at Y&R.

The aftereffects of this having happened likely impacted Muhney’s hope to be rehired in the summer of 2014, when Y&R interview him, Justin Hartley (who became the most recent Adam), and others. However, a number of years have now passed. So, it feels more plausible that Muhney could be brought back now if Y&R wants him.

Buzz indicating that the one-time Y&R megastar isn’t being considered as the once and again Adam Newman is speculative, as neither the show nor the actor has commented publicly about the matter.

There are unique considerations that have been, or could be made if this actual rehire were to occur, as will be addressed below.

Muhney hasn’t tweeted in approximately three weeks, which is somewhat atypical. His smart use of social media since being let go from Y&R’s cast has enabled a meaningful connection with more than one hundred thousand followers to be maintained.

Speaking directly to his audience, without the filter of the media, as was true in past eras, allowed Muhney to accomplish a number of important goals.

He made sure that his name remained in the public’s consciousness. Muhney also told his story to the world, with that being that former executive producer Jill Farren Phelps had been kind to him and that he understood his own overly assertive on-set actions led to what was a stunning release at the top of his career and daytime popularity.

The unique considerations referenced earlier are two-fold. First, do the current behind the scenes powers at Y&R feel confident that Muhney will be part of the team this time around?

Second, and of equal importance, will a contingent of interactors flood social media with negativity about his return, continuing to purposely mine a neutralized rumor about why Muhney was let go?

Savvy soap fans understand that Muhney’s return would certainly, without even one doubt, cause Y&R’s ratings to bump up the day of his come back.

Increased viewership would project as sustained near the increased level as the returned Adam story played out, due to Muhney specific fans, who hadn’t been watching Y&R, along with casual viewers, and other curiosity seekers remained tuned in.

So, Muhney’s rehire could reap short-term benefits, despite whatever campaign was being waged against him by an uncountable number (which could well be small) of self-appointed antagonists who, in their minds, made themselves part of the story.

In contrast, Y&R could simply hire someone else to be Adam Newman. That choice worked in Hartley’s case and would likely draw a far more negative reaction, as Muhney supporters would be legitimately upset and wouldn’t hesitate using social media to express their feelings. Such is the double-edged sword of Y&R’s choice.

If Muhney is actually rehired, it would arguably become the biggest soap story of this decade. That prediction is possible because of his terrific run, which ended in January 2014, the controversy that’s lingered since, and his realized shot at redemption.

It’s a real-life soap opera story, as intriguing as however Adam Newman would be written back to life again. CDL is a leading source for everything linked to The Young and the Restless. Check back regularly for Y&R spoilers and news!