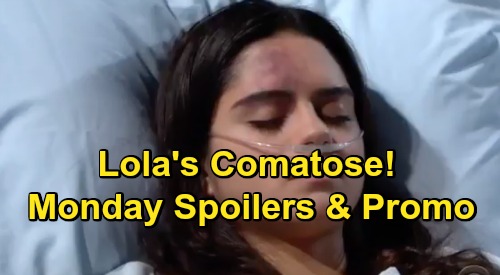 The Young and the Restless (Y&R) spoilers for Monday, February 18, tease that Kyle Abbott (Michael Mealor) will panic as he pulls Lola Rosales (Sasha Calle) from the Abbott pool. He’ll call for paramedics and push Lola to stay with him. On the ground near Kyle and Lola, a stray earring will be in the snow.

Meanwhile, Mia Rosales (Noemi Gonzalez) will return home and notice she’s missing one of her earrings. She’ll contact the GCAC, but no one will have turned it in. At the hospital, Arturo Rosales (Jason Canela) will show up and warn Kyle that Lola had better be OK.

Abby Newman (Melissa Ordway) will also fill Kyle in on the search for evidence. Thanks to Lola’s smashed phone, the cops will suspect foul play. Once Kyle gets grilled by a detective, Arturo will hurl accusations.

Kyle will shut Arturo down before receiving a call from Mariah Copeland (Camryn Grimes). He’ll hear that Lola was at Crimson Lights before she headed over to see him at the pool house.

The Young and the Restless spoilers say Dr. Nate Hastings (Brooks Darnell) will run some tests and reveal that Lola still has brain function. However, he won’t be certain about what’s ahead for her. Nate will admit that Lola should’ve been awake by now.

Kyle will offer gentle encouragement to an unconscious Lola and assure her of his love. He’ll promise that they’ll get their happy ending.

Back with Mia, she’ll peruse the news for any info on Abby’s current state. Suddenly, Abby herself will buzz the intercom and explain that Lola faced a violent attack. A stunned Mia will cry out in horror, so it’s clear that she got the wrong gal!

He’ll note that Victoria has been arrested. Nikki will insist that Victoria wasn’t involved, so Michael needs to get her daughter out of this jam.

In the interrogation room, Y&R spoilers say Sharon will be upset over Rey Rosales’ (Jordi Vilasuso) actions. Nevertheless, Rey will insist he’s just doing this by the book. He’ll maintain that he still loves Sharon, which is why this is so hard for him.

Afterward, Sharon will meet with her lawyer, Brittany Hodges (Lauren Woodland), and explain the circumstances of her confession. Brittany will realize Rey employed some emotional manipulation to get the info he wanted. She’ll also learn Rey looked at Sharon’s papers without her permission.

Over with Christine Williams (Lauralee Bell), she’ll talk to Rey about the recent arrests. Christine will feel like they still don’t have enough without some hard proof. Later, Brittany will announce that Sharon is recanting. She’ll maintain that her client isn’t going to answer any more questions.

Once Victoria learns Nikki wasn’t the reason she was taken into custody, Rey will appear. He’ll insist that Victoria was there when J.T. Hellstrom (Thad Luckinbill) died, but Victoria will deny it. She’ll argue that Nikki and Victor Newman (Eric Braeden) are innocent as well. Rey will saunter out, which will leave Michael to chat with Victoria. He’ll feel like someone has to be lying here.

Back with Nikki, she’ll stand by her claims about acting alone. After Nikki heads back to her cell, the other cover-up crew members will be placed in holding rooms. Phyllis will get a stern warning when she’s questioned by Rey. He’ll contend that Nikki may be the killer, but the others could go down with her.

At Phyllis’ request, she’ll meet with Christine and push for a deal. Phyllis will vow to tell Christine every last detail regarding J.T.’s death, but she’ll want to know what she’d get in return.

Outside the interrogation room, Rey will try to shoo Arturo away. That’s when Arturo will reveal that something terrible has happened to Lola.