The Young and the Restless Spoilers: Summer Accused of Leaving Lola to Die – Kyle Rages at Ex While Mia Covers Her Tracks 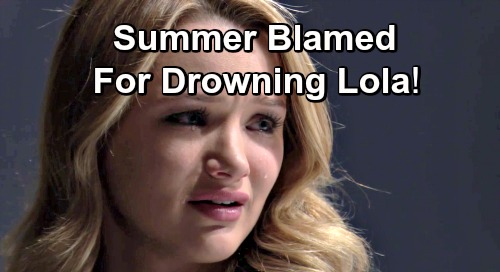 The Young and the Restless (Y&R) spoilers tease that confusion will spell trouble on the CBS soap. In Friday’s Y&R episode, Mia Rosales (Noemi Gonazlez) has a major fight with Abby Newman (Melissa Ordway) before going home to get even more drunk. She’s in no condition to recognize anybody or know she’s about to make a stupid mistake.

Meanwhile, Abby lends Lola Rosales (Sasha Calle) a coat before Lola ultimately decides to hear Kyle Abbott (Michael Mealor) out. Since Kyle lives at the pool house, that puts Lola by the pool in Abby’s hooded jacket. A woman wearing heels knocks Lola to the ground, so it’s easy to guess this is inebriated Mia. Abby lives at the Abbott mansion as well, which means Mia likely stormed over there for revenge.

To make matters worse, Lola’s head injury leaves her disoriented when she gets up. She falls in the Abbott pool, where she’ll nearly drown before Kyle comes to her rescue. The Young and the Restless spoilers suggest that Mia’s in for a shock when she realizes her blunder. If she’s to blame as we expect, Mia will undoubtedly keep quiet about almost killing the adored sister of the two men she loves.

Mia could lose her shot at repairing the damage with Rey Rosales (Jordi Vilasuso) over this. She’d obviously lose any hope she might have with Arturo Rosales (Jason Canela), too. Arturo would hate Mia for trying to attack Abby AND putting Lola’s life in jeopardy. It’s clear that Mia will be in a tight spot.

However, more confusion could work in Mia’s favor. Everyone else will think Lola was targeted, which will be a head-scratcher for Kyle. Lola can be stubborn and even self-centered at times, but she doesn’t have a long list of enemies. She’s pretty well-liked around town with the exception of one crucial person. Naturally, we’re talking about Summer Newman (Hunter King).

The Young and the Restless spoilers say Arturo will accuse Kyle of going after Lola, but Kyle will insist that he’s innocent. He’ll also will vow to find out who’s responsible, so don’t be surprised when Summer is his top suspect. Y&R has given us the perfect setup for Summer to be wrongfully accused. She’s been feuding with Lola and after that cabin argument with Kyle, she may think she’s lost him for good.

It’ll be simple for Kyle to connect the wrong dots and assume Summer confronted her rival. Kyle may argue that Summer flew into a rage when she couldn’t get what she wanted. He already believes Summer is trouble and only causes pain. Kyle could contend that Summer must’ve shoved Lola in the pool and left her there to die.

Of course, Summer is a schemer, not a psychopath. She may point that out to Kyle, but will he listen? This is probably the show’s way of making fans have some sympathy for Summer. She’s been causing drama from the moment she returned to Genoa City, so having her suffer a bit could be beneficial. Soap viewers tend to soften once a manipulative character faces enough sorrow.

Once Kyle accuses Summer, she’ll be hurt that he thinks she’s capable of this. Kyle should be sorry after the real story comes out, so this could go a long way toward creating a genuine love triangle. Between Lola’s near-death experience and his harsh actions toward Summer, Kyle could end up quite torn.

As for Mia, The Young and the Restless spoilers say she’ll just try to stay out of this nightmare. Mia will cover her tracks, but that plan will hit a big snag. Will Kyle eventually solve the mystery and expose the true culprit? We’ll give you updates as other Y&R news comes in. Stick with the CBS soap and don’t forget to check CDL often for the latest Young and the Restless spoilers, updates, and news.