BY Heather Hughes on February 15, 2019 | Comments: one comment
Related : Soap Opera, Spoiler, Television, The Young and the Restless 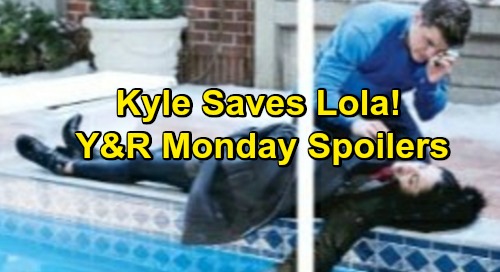 The Young and the Restless (Y&R) spoilers for Monday, February 18, tease that Christine Williams (Lauralee Bell) will do some strategizing. She’ll realize she can’t let any of the arrested cover-up crew members talk or else they’ll cobble together another bogus story. Christine wants to nail them with the truth, so her best bet is keeping them all apart.

Nikki Newman (Melody Thomas Scott) has already been questioned, but she’ll obviously have to be questioned again. Her latest story doesn’t match up with Sharon Newman’s (Sharon Case) claims, so she’ll find herself on the hot seat once more.

Sharon will undoubtedly have to repeat her version of events as well. Christine will want to confirm what Sharon told Rey Rosales (Jordi Vilasuso).

Victoria Newman (Amelia Heinle) will also squirm as she gets grilled on Monday. She’ll have a hard time knowing how much to divulge since she won’t know what the others have spilled.

However, it’s Phyllis Summers (Gina Tognoni) who’ll be willing to put it all out there and take down the others. She hinted she might cut a deal if it came down to it, so she’ll be willing to sing like a canary to save herself.

Of course, Phyllis and Christine have a complicated history to say the least. Chris won’t exactly be eager to let Phyllis get away with her involvement, but Phyllis will insist she can make it worth her while. She’ll have no qualms about testifying against the other women in court.

When Christine notes that she could make deals with any of the other ladies, Phyllis will argue that her deal’s the way to go. She’ll promise physical evidence that would guarantee a conviction, so Christine should be tempted. The Young and the Restless spoilers say Christine will mull over Phyllis’ offer and wonder what the right call is.

Across town, Kyle Abbott (Michael Mealor) will head home to the Abbott pool house and make a disturbing discovery. He’ll spot someone floating in the pool, so he’ll pull the individual to safety. Naturally, he’ll be absolutely horrified when he realizes it’s Lola Rosales (Sasha Calle). Y&R fans can expect Kyle to do whatever he can to save Lola’s life.

After paramedics are called, Lola will be rushed to the hospital. That’s when Arturo Rosales (Jason Canela) will arrive and start throwing around accusations. He’ll blame Kyle for this, but the truth is far more complicated than that!