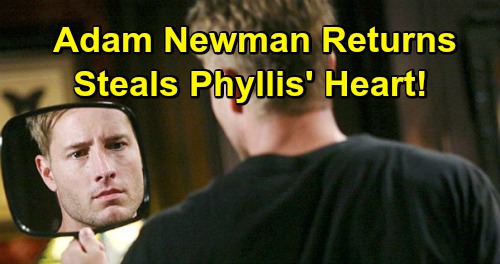 The Young and the Restless (Y&R) spoilers tease that Adam Newman is headed back to the CBS soap, but he’ll have a brand-new face. Soap Opera Digest recently confirmed that the show’s searching for a new actor to play Adam, which seemingly means they aren’t considering Michael Muhney for the role. That’s certainly disappointing to Muhney’s fans, but it’s not surprising.

Muhney’s portrayal of Adam was popular, but his return would come with some baggage. Since his name was included in some Y&R scandals, it appears The Young and the Restless just wants to avoid that mess entirely. They’re apparently starting with a clean slate, which could be a good thing in terms of romantic pairings for Adam.

It’d be a no-brainer for Y&R to bring back Chelsea Newman (Melissa Claire Egan) at some point. They might as well try Egan’s chemistry out with the new actor and see what happens. They could easily strike gold again and have another hot pairing for viewers to root for.

However, The Young and the Restless wouldn’t be locked into that. Chelsea could remain on the run and unreachable, which would actually give Adam a reason to hold a grudge. It could fuel his war with Victor Newman (Eric Braeden), who played a big role in why Chelsea had to leave town.

Nick Newman (Joshua Morrow) didn’t exactly step up for Chelsea the way Adam would have, so he could get caught in the conflict, too. With a Christian Newman (Jude and Ozzy McGuigen) custody battle at the center of the drama, it’d be a great Y&R story. The show could definitely make a big splash with Adam’s comeback.

Of course, Adam would still need a love interest. Perhaps he could be paired someone who’s got an equally complicated relationship with the Newman clan. Phyllis Summers (Gina Tognoni) immediately comes to mind. Phyllis will probably have turned against Nick by then and if not, we all know how easily she’s tempted! Adam might swoop in and steal Phyllis’ heart for revenge.

Naturally, the scheme could turn to true love. It’s easy to imagine Phyllis and the new Adam happily plotting against the Newmans together. Will Phyllis upgrade to a more complex Newman who’s fully on her side? It sounds like it’d be a fun idea for the show to take advantage of.