BY Heather Hughes on February 14, 2019 | Comments: one comment
Related : Soap Opera, Spoiler, Television, The Young and the Restless 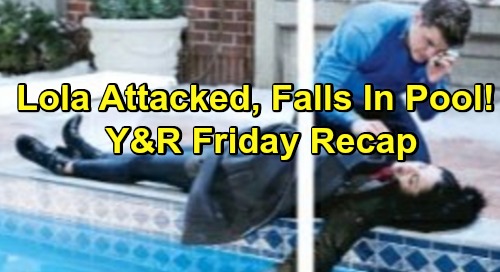 The Young and the Restless (Y&R) spoilers and recap for Friday, February 15, tease that Rey Rosales (Jordi Vilasuso) will pry the whole truth out of Sharon Newman (Sharon Case). He’ll get her to admit that she witnessed J.T. Hellstrom’s (Thad Luckinbill) death and covered it up with the other ladies. Sharon will insist that they didn’t think the cops would see it as self-defense.

Rey will receive confirmation that Sharon, Nikki Newman (Melody Thomas Scott), Victoria Newman (Amelia Heinle) and Phyllis Summers (Gina Tognoni) were all involved. He’ll rant about it being murder, but he’ll ultimately soften on that. Rey will suggest that the circumstances of that night will be taken into consideration.

Sharon will talk about how they buried J.T.’s body in Chancellor Park. She’ll fret about the missing corpse and contend that they’ve all been living a nightmare. Rey will embrace Sharon in an effort to comfort her, but he’ll also point out she handed over evidence against Victor Newman (Eric Braeden).

Sharon will be apologetic about that. She’ll assure Rey that she never wanted an innocent man to go down for this. Unfortunately, The Young and the Restless spoilers say arrests will have to be made. Rey will take a distraught Sharon into custody, so this is sure to be a rough end to her Valentine’s Day.

The same goes for Phyllis, who’ll be disturbed from her bedroom time with Nick Newman (Joshua Morrow) and led to the GCPD in handcuffs. Billy Abbott (Jason Thompson) will watch Victoria be arrested and hauled away as well. Y&R fans can expect Sharon to face backlash soon enough!

Other Young and the Restless spoilers say Mia Rosales’ (Noemi Gonzalez) fight with Abby Newman (Melissa Ordway) will quickly get out of hand. Thanks to too many drinks and way too much rage, Mia will be pushier than ever. She’ll hurl insults and contend that she could have Arturo Rosales (Jason Canela) if she wanted him.

Abby certainly won’t think so. She’ll argue that Mia’s alone because she’s a nobody, which will escalate the argument. The Young and the Restless spoilers say Mia will start pulling Abby’s hair, so Abby will yank Mia’s necklace off to return the favor.

Mariah Copeland (Camryn Grimes) and Tessa Porter (Cait Fairbanks) will help Arturo separate these rivals. Soon after, Abby will have Mia kicked out of the athletic club. Before she leaves, Mia will warn Arturo that he’s going to regret ever meeting Abby.

Next, Lola Rosales (Sasha Calle) will arrive and provide updates on her romantic woes. She’ll tell Abby and Arturo that she caught Kyle Abbott (Michael Mealor) and Summer Newman (Hunter King) together. Once Kyle appears, Arturo will toss some threats around and convince him to leave. However, Kyle will maintain that he loves Lola and wants to make things right.

Once Arturo turns his attention back to Lola, he’ll argue that his sister doesn’t need a guy like Kyle. Abby, on the other hand, will still be rooting for them. She’ll think Lola should at least let Kyle make his spiel. Abby will let Lola borrow a coat, which it seems will be a crucial mistake…

At Crimson Lights, Mariah and Tessa will have the place to themselves. Lola will interrupt their slow dance and explain her Kyle problems. Tessa and Mariah will think Summer is the real issue here. They’ll point out that love can bring plenty of hurdles and urge Lola to go talk to Kyle.

Back with Mia, she’ll continue to fume as she throws back more alcohol at home. Mia will glare at Abby and Arturo’s engagement picture spread as she drinks. Outside the Abbott pool house, Lola will be wearing Abby’s coat with the hood up. Suddenly, a woman in heels will approach.

The Young and the Restless spoilers say Lola will hit her head after she’s shoved to the ground. When she gets up, she’ll stagger into the freezing pool water nearby! It looks like Mia may have been behind this attack and case of mistaken identity.

Y&R viewers won’t want to miss the exciting scenes ahead. We’ll keep you posted as other news comes in. Stay tuned to the CBS soap and don’t forget to check CDL often for the latest Young and the Restless spoilers, updates, and news.