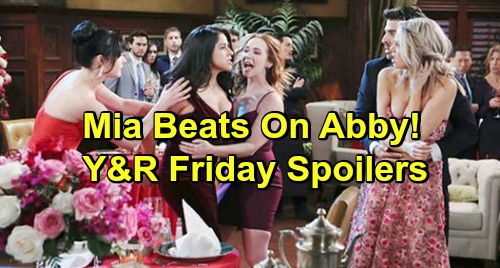 The Young and the Restless (Y&R) spoilers for Friday, February 15, tease that Rey Rosales (Jordi Vilasuso) will have a big decision to make. Thursday’s Y&R episode brings a partial confession from Sharon Newman (Sharon Case). She ends up indicating that J.T. Hellstrom (Thad Luckinbill) was killed in self-defense and adds that “we” had no choice.

Obviously, Rey will want to know exactly what “we” means on Friday. He’ll demand the rest of the story and hope he can find out who else is in on this with Sharon. Rey will beg Sharon to trust him and let him help her, but this is a pretty by-the-book detective we’re talking about. He may not be able to offer as much help as Sharon would like!

Nevertheless, Sharon will be weary from months and months of secret-keeping. It looks like she just won’t be able to keep a lid on this anymore. Sharon has always been the weakest link of the cover-up crew. She’s been the one everybody thought would break, so she’s really just living up to expectations right now.

The Young and the Restless spoilers say a pact will be exposed on Friday. Rey already knows Nikki Newman (Melody Thomas Scott) was involved in this mess. Since Sharon’s admitting her own involvement, Rey may assume the other girls’ night gang members took part. Sharon may feel like their only shot at keeping their freedom is the truth.

It sounds like Sharon will rat Victoria Newman (Amelia Heinle) and Phyllis Summers (Gina Tognoni) out as well. Of course, Sharon will do her best to keep Mariah Copeland (Camryn Grimes) out of this. Mariah was passed out drunk that night, so Sharon won’t see why her daughter should get dragged into it. She may even fib that Mariah still doesn’t know anything.

Sharon will want to fill Rey in on everything, but it’s different when you’re protecting your kids. That’s the one part of the story Sharon may fudge a bit. Unfortunately, Mariah will indeed get caught in the crisis sooner or later.

For now, Rey will have a lot of information to process. He’ll have to decide how he’s going to handle the news of this crazy alliance. Going straight to Christine Williams (Lauralee Bell) seems like a no-brainer.

At the athletic club, Abby Newman’s (Melissa Ordway) plan to confront Mia Rosales (Noemi Gonzalez) will go horribly wrong. Alcohol and anger aren’t a good mix, so Mia will resort to violence. She’ll pull Abby by the hair and start shoving her around. Mariah, Tessa Porter (Cait Fairbanks) and Arturo Rosales (Jason Canela) will intervene, but Mia and Abby will remain fierce enemies.

There’s a good chance this war is just beginning, so don’t miss the crazy twists and turns ahead. The Young and the Restless spoilers say some great drama’s coming up. We’ll give you updates as other Y&R details emerge. Stay tuned to the CBS soap and don’t forget to check CDL often for the latest Young and the Restless spoilers, updates, and news.

Abby and Arturo are making a splash courtesy of @LifeandStyle! #YR pic.twitter.com/vCvzDvxmiR