The Young and the Restless Spoilers: Week of February 11 Update – Brawl, Bedroom Bust, and All-Out War 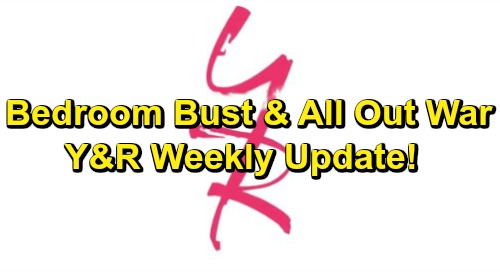 The Young and the Restless (Y&R) spoilers update for the week of February 11-15 tease that serious consequences are on the way. First, it’ll be Nikki Newman’s (Melody Thomas Scott) turn to come clean and take responsibility for her actions. However, coming clean won’t mean telling Rey Rosales (Jordi Vilasuso) every last detail.

Nikki will do her best to hide Sharon Newman (Sharon Case) and Phyllis Summers’ (Gina Tognoni) involvement. She’ll make sure Victoria Newman’s (Amelia Heinle) role in all this is minimized as well. Nikki’s the one who struck the fatal blow, so she’ll hope she’s the only one who has to go down for it.

Elsewhere, Phyllis will hide her trail. Despite Nikki’s desperate efforts, Rey and Christine Williams (Lauralee Bell) may think there’s more to the story. Phyllis will work hard to keep her name out of this, but Sharon will end up blowing it for her later.

Before we get to that bombshell, we have to focus on another one. Mia Rosales (Noemi Gonzalez) will make the ultimate bedroom blunder by calling out Arturo Rosales’ (Jason Canela) name during sex with Rey. Her hubby will be furious, so he’ll run off to the cottage and declare his love for Sharon.

The Young and the Restless spoilers say Sharon will profess her love as well, so they’ll start planning their future together. Before Rey and Sharon can kick off this wonderful journey, a shocking discovery will change the game. Y&R fans can expect Rey to get a huge clue about the night J.T. died. He’ll confront Sharon, who will likely spill all.

Afterward, the cover-up crew will spin out into chaos. As their alliance is exposed, some fierce battles will erupt. Over with Jack Abbott (Peter Bergman), he’ll rush to Kyle Abbott’s (Michael Mealor) defense. Perhaps Abby Newman (Melissa Ordway) will give Kyle a hard time about his issues with Lola Rosales (Sasha Calle). Jack may take Kyle’s side and insist that Lola’s insecurities are the real problem.

It’s true that Kyle would prefer to have sex on the table – both literally and figuratively. Still, that’s not the only problem in his romance. Lola constantly nitpicks and can be a bit on the selfish side. Kyle respects her goals and dreams, but Lola gets upset over little things like a handbag or a photoshoot. She’s not the easiest woman to deal with, so Jack may understand Kyle’s frustration.

Summer Newman (Hunter King) will take advantage of the drama by turning on the charm and growing closer to Kyle. What will Valentine’s Day bring for these exes? Time will tell, but the holiday will deliver some happy moments for Tessa Porter (Cait Fairbanks) and Mariah Copeland (Camryn Grimes). They’ve been through a lot over the last few months, so they deserve a lovey-dovey night.

Unfortunately, Mariah and Tessa’s romantic evening will be derailed by a war at the athletic club. They’ll have to break up a physical altercation between Abby and Mia, so Young and the Restless viewers will want to stay tuned. We’ll give you updates as other news comes in. Stick with Y&R and don’t forget to check CDL often for the latest Young and the Restless spoilers, updates, and news.