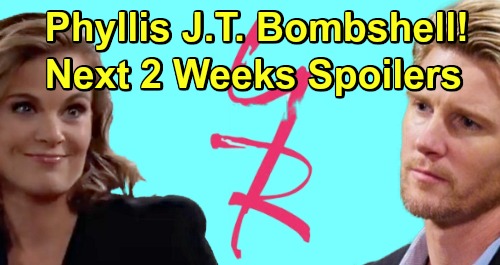 The Young and the Restless (Y&R) spoilers for the next two weeks tease that love will bloom for some Genoa City residents, but it’ll crash and burn for others. During the week of February 11-15, Nick Newman (Joshua Morrow) will have some surprises in store for Phyllis Summers (Gina Tognoni). They’ll play a game of Valentine’s Day strip trivia as they take a walk down memory lane.

After they spend some time reflecting on their history, Nick will shock Phyllis with a special gift. He’ll give her a sign from the honky-tonk bar where their nuptials once took place. Y&R fans can expect Phyllis to be touched by the gesture. She’ll thank Nick in more ways than one as soon as they hit the bedroom.

Meanwhile, Charlie Ashby (Noah Alexander Gerry) and Mattie Ashby (Lexie Stevenson) will have questions. They won’t understand why Cane Ashby (Daniel Goddard) intends to skip a Valentine’s Day visit with Lily Ashby (Christel Khalil). Cane will do his best to placate the twins, but they’ll still need his help with a project.

The Young and the Restless spoilers say Mattie and Charlie will make a video about their parents’ love story. Cane will get choked up over the teens’ sweet efforts. He’ll add his own message to complete the video and hope that it touches Lily’s heart.

Over with Mia Rosales (Noemi Gonzalez), she’ll be jealous when she spots Abby Newman’s (Melissa Ordway) engagement photos with Arturo Rosales (Jason Canela). They’ll be on the cover of Life & Style, so this magazine spread will really drive Mia up the wall.

Mia will later call Arturo’s name out during sex with Rey Rosales (Jordi Vilasuso), so he’ll take that as a sign that he should be with Sharon Newman (Sharon Case). After Sharon and Rey declare their love for each other, things will get messy. A phone bill with a suspicious 911 call will lead to a grilling session. Since Sharon made that call the night J.T. Hellstrom (Thad Luckinbill) died, Rey will want some answers.

At the cabin, Kyle Abbott (Michael Mealor) will get hot and heavy with Summer Newman (Hunter King) while battling a broken heart. What he won’t realize is that Lola will be on her way! During the week of February 18-20, Kyle will discover something shocking. This may involve spotting Lola or it could involve something he learns when he returns home.

Either way, Kyle’s life isn’t going to be easy in the coming weeks. The same goes for the cover-up crew. The exposure of their alliance the week before will set up even more shockers. The Young and the Restless spoilers say Nikki Newman (Melody Thomas Scott) will feel like her world’s been torn down around her.

Phyllis will also drop a bomb that changes the game, so maybe it really is every woman for herself! Y&R buzz says fans can expect a huge J.T. bombshell to drop – one that will begin to explain much of the mystery.

The Young and the Restless spoilers say Victor Newman (Eric Braeden) will do whatever it takes to protect his family. He’ll rev up his efforts to keep them all safe and out of prison, but that should be a difficult task! We’ll give you updates as other Y&R news comes in. Stay tuned to the CBS soap and don’t forget to check CDL often for the latest Young and the Restless spoilers, updates, and news.