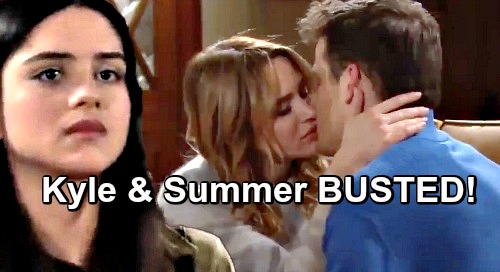 The Young and the Restless (Y&R) spoilers tease that Kyle Abbott (Michael Mealor) will be down in the dumps. He’ll take Jack Abbott’s (Peter Bergman) advice and try to do something special for Lola Rosales (Sasha Calle), but she’ll turn him down flat. Lola will blast Kyle for thinking she could go on a cabin getaway when she’s got a restaurant to prepare for.

Kyle will argue that you have to make time for the people you care about, but Lola won’t have the same perspective. This obviously isn’t the first example of them not being on the same page. Lola will contend that since they can’t seem to agree, maybe they should just go their separate ways.

Of course, Kyle truly loves Lola and wants to be with her. He’s just growing frustrated since she’s always caught up in work and often disapproves of his plans. Lack of sex is also an issue, but it probably wouldn’t be as big of one if Summer Newman (Hunter King) wasn’t around to stir the pot.

Nevertheless, Summer is indeed back in town and she’s ready to make more waves. The Young and the Restless spoilers say Summer will turn on the charm this week. She’ll hope to make Kyle forget all about Lola, but he’ll still be pretty heartbroken.

Kyle will ultimately decide he needs to be alone for a while, so he’ll head off to the cabin to mope on his own. Naturally, Summer will follow Kyle and surprise him by showing up at the door. Since Kyle will be distraught and lonely, Y&R spoilers say he won’t turn Summer away. He’s been warming up to her a bit anyway, so he’ll welcome her inside and they’ll toss back some drinks.

Meanwhile, Lola will be miserable over the relationship disaster. Mariah Copeland (Camryn Grimes) and Tessa Porter (Cait Fairbanks) will decide to speak up for Kyle. They know he’s a good guy at heart, so they’ll push Lola to remember that, too.

Tessa and Mariah won’t think Lola should throw in the towel just yet. They know from personal experience that it’s possible to get past major romantic obstacles.

Plus, Mariah and Tessa would clearly rather have Lola as Kyle’s partner on double-date nights instead of Summer. That should give them a little extra motivation to root for Lola and Kyle. A Snowflake-free zone is always preferable.

Jack will also offer some encouragement to Lola, so she’ll eventually be convinced. Lola will decide she needs to go for a grand gesture and make things right. The Young and the Restless spoilers say Lola will drive over the cabin, but she’s in for a huge shock when she gets there. Furious Lola will soon see that Kyle has wasted no time in moving on.

Will Lola catch Kyle and Summer in a passionate moment? I’ll be a massive disappointment if she doesn’t! This is the perfect soapy setup for an ex sex bombshell, so let’s hope Y&R delivers. We’ll give you updates as other news comes in. Stick with the CBS soap and don’t forget to check CDL often for the latest Young and the Restless spoilers, updates, and news.