The Young and the Restless Spoilers: Lola Drowns in Abbott Pool, Rushed to Hospital in Critical Condition 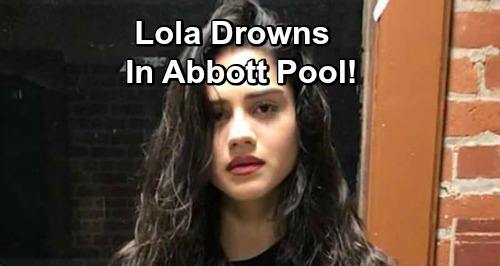 The Young and the Restless (Y&R) spoilers tease that Kyle Abbott (Michael Mealor) will be frustrated after Thursday’s blowup with Lola Rosales (Sasha Calle). She saw him kissing Summer Newman (Hunter King) at the cabin, so she naturally flipped out. Lola feels like this is proof that Kyle only wanted someone who could give him sex. However, that’s not the case at all.

Kyle certainly feels like his relationship with Lola could be improved by sleeping together, but he loves Lola with or without it. Summer’s the one who strutted into town and caused so much drama. Kyle even tried to tell Summer that he was still in love with Lola, but those lips of hers were relentless!

Of course, Kyle could’ve turned Summer away at the door. He’ll probably be wishing he did as he replays recent events in his head. The Young and the Restless spoilers say Kyle will be furious with Summer for her role in the chaos, but he’ll feel like he’s to blame as well.

If you give Summer an inch, she takes a mile. Kyle really should’ve put Mariah Copeland’s (Camryn Grimes) advice to good use and cut Summer out of his life. He may try that now, but what about his train wreck of a relationship with Lola? We won’t give her a pass since her selfishness and nitpicking didn’t help matters, but the point is “Kola” will seem too damaged to repair.

Fortunately, Y&R can always mend even the most broken of hearts. Sometimes it just takes a little danger…or a lot in Lola’s case! The Young and the Restless spoilers state that Kyle will make an alarming discovery during the week of February 18-22. After taking a drive to clear his head, Kyle will spot someone floating in the Abbott pool.

Once Kyle finds this drowning individual, he’ll dive in and make a heroic rescue. That’s when Kyle’s discovery will become doubly shocking. He’ll turn the victim over and realize it’s Lola who’s dying right in front of him.

The Young and the Restless spoilers say Kyle will panic, but he’ll manage to call 911 and get Lola to the hospital. She’ll be in critical condition, so a difficult waiting game will begin. Kyle will need lots of support from his loved ones, especially since he’ll have no idea how this happened.

Lola will undoubtedly pull through this, so she should have quite a story to tell when she wakes up. In the meantime, Kyle may seek another path to answers. We’ll give you updates as other Y&R news comes in. Stay tuned to the CBS soap and don’t forget to check CDL often for the latest Young and the Restless spoilers, updates and news.