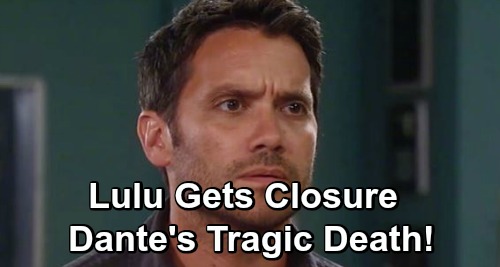 General Hospital (GH) spoilers tease that Dominic Zamprogna will reprise his role as Dante Corinthos, but he won’t be back for good. Zamprogna recently posted a fun photo of himself on social media. He took the pic in his temporary dressing room at GH, so fans are already getting excited.

What appears to be a prisoner’s uniform is hanging on the door, so that’s a clue we’ll address in just a moment. However, we should talk about what Dante’s comeback means first. Soap Opera Digest confirms it’ll be longer than the single episode fantasy that Dante was part of. General Hospital viewers will recall that Dante had a very different life in Sonny Corinthos’ (Maurice Benard) alternate reality.

At the time, Zamprogna addressed his one-day return in SOD. He suggested he hoped GH fans would enjoy it and not get too frustrated over how short it was. Zamprogna didn’t want to give anyone false hope about it being a permanent thing. He’s busy with other projects, so General Hospital just doesn’t fit in his long-term schedule right now.

Zamprogna hasn’t changed his mind since this stint also won’t be permanent. It’ll be more than just one episode, but Dante will ultimately be written out once again. It sounds like GH is bringing Dante back to give some closure to his story. They can’t just let Dante stay off on a WSB mission forever and leave Lulu Falconeri (Emme Rylan) stuck in limbo. That’s not fair to the character or the actress.

Lulu deserves the chance to move on one way or another. Since they’re at least bringing Dante back short-term, we can probably rule out a recast. They would’ve just brought in a new guy if that’s what they had in mind. There’d be no point in reminding us what the old Dante looked like.

That narrows it down to two options for Dante closure. They can have him divorce Lulu and leave town, which isn’t ideal since he’d have to bail on Rocco (O’Neill Monahan) and a family who loves him. Unfortunately, that could mean killing Dante off is the only plan to wrap things up all neat and tidy.

Carly Corinthos (Laura Wright) is pregnant, so she’ll be adding to Sonny Corinthos’ (Maurice Benard) brood if all goes well. That could bring this devastated father some joy despite the darkness of Dante’s potential death. As for Lulu, she could grieve and get a new love interest down the road. Lulu could lean on Maxie West (Kirsten Storms) for support since Maxie knows what it’s like to lose a husband.

If GH indeed wants Dante to die, how will they kill him? Perhaps a search and rescue effort for Dante will end in disaster. We mentioned the prisoner uniform that seems to be in Zamprogna’s dressing room. That lines up with CDL’s previous reports about Dante being held against his will somewhere.