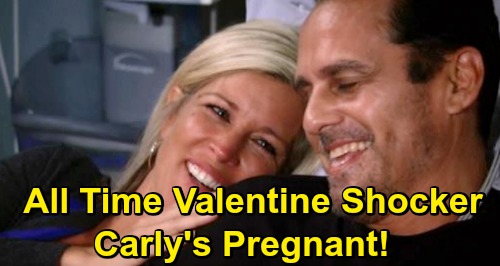 General Hospital (GH) spoilers tease that one couple will reveal some surprising news soon. Ever since Valentine’s Day preview info surfaced, GH fans have been talking about the big announcement. One Port Charles resident has a bun in the oven and will share the shocker on this romantic holiday.

Who’s the lucky lady and which leading man will be right by her side? There’s no confirmation on which couple it’ll be just yet, so it’s still a mystery at this point. However, the buzz is really heating up around one startling option. Could Carly Corinthos (Laura Wright) be the one who’s got a baby on the way?

This idea is certainly gaining traction on social media, so it’s worth considering. Maurice Benard seems to have plenty of sway in his storylines. It’s possible Benard pushed for “CarSon” to have another kid. Now that Mike Corbin (Max Gail) is at Turning Woods, Sonny and Carly need something else to keep them occupied.

General Hospital may even be setting up Morgan Corinthos’ (Bryan Craig) return from the dead. If Carly ultimately loses this potential baby, perhaps Morgan’s comeback could help her overcome the devastating blow. It feels like a weird, out-of-the-blue choice, but it’s not so odd if they have the big picture in mind.

Plus, Carly asked tons of questions about Sam McCall’s (Kelly Monaco) children during their last chat. Was that a crucial clue? Carly isn’t usually that curious about the kiddos, so maybe it was a hint that she’s got babies on the brain.

General Hospital spoilers say Carly and Sonny will take a getaway by the end of the week. They’ll reevaluate their future together on a new GH episode Friday, February 15. That could line up with some post-baby announcement planning. Sonny and Carly couldn’t have been expecting another bundle of joy, but they’ve clearly got enough love in their hearts to add to their brood.

Do you think Carly and Sonny could be the expectant couple? Will they announce the pregnancy and head off to celebrate alone? Could this surprise pregnancy tie in with Morgan’s comeback down the road? We’ll give you updates as other GH details emerge. Stay tuned to the ABC soap and don’t forget to check CDL often for the latest General Hospital spoilers, updates and news.