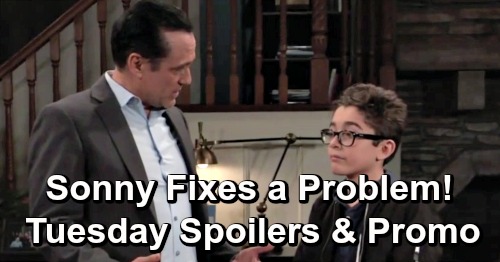 General Hospital (GH) spoilers for Tuesday, February 12, tease that Sonny Corinthos (Maurice Benard) will give Spencer Cassadine (Nicolas Bechtel) some good advice. Ever since Spencer tampered with the mayoral election, it’s been weighing heavily on his mind. Sonny already knows what Spencer did, so the kid will feel safe confiding in him. Spencer will just wish he could finally find some peace.

Sonny will contend that there’s an easy fix for that. He’ll push Spencer to surprise his grandmother and tell her the truth. Sonny will feel like honesty would score some points with Laura Webber (Genie Francis), even though she’ll inevitably be angry. Bottom line, Spencer will have to wrestle with his conscience until he comes clean. It’ll be a tough decision, but it’s one he needs to make soon.

In the meantime, Laura will confront Franco Baldwin (Roger Howarth) in lockup. She’ll rant about Lulu Falconeri’s (Emme Rylan) attack as well as Kiki Jerome’s (Hayley Erin) murder. Laura will be furious about Franco getting so close to Elizabeth Webber (Rebecca Herbst) and her boys, too. She’ll vow to make sure Franco never poses a threat to anyone ever again.

Cameron Webber (William Lipton) will also believe Franco’s guilty. It looks like he’ll get into a fight on Tuesday’s new GH episode, February 12, so Liz should scold her son for putting his parole in jeopardy. However, Cam will be more concerned about the serial killer they’ve been living with. Despite Elizabeth’s insistence that Franco is innocent, Cameron will push his mom to admit she could be wrong.

Still, Liz will just know Franco couldn’t have killed Kiki or harmed Lulu. She’ll remain on Franco’s side, so it’s good that he’s got someone to believe in him. In fact, Drew Cain (Billy Miller) will also be on “Team Franco.” He’ll tell Jordan Ashford (Briana Nicole Henry) that Franco couldn’t bring himself to take another person’s life – at least not anymore.

Over with Liesl Obrecht (Kathleen Gati), she’ll play games with Sasha Gilmore (Sofia Mattsson). Liesl will suggest she’s looking forward to getting better acquainted, but she’ll probably throw in some veiled threats as well. Sasha should be pretty rattled by the end of this conversation, but a big announcement should take the heat off for now.

Of course, Peter and Maxie won’t agree that it’s in Nina’s best interest, but they’ll put on a smile anyway. What else can they do when Nina’s following her heart? Too bad a storm’s brewing for Nina thanks to the fake daughter drama!