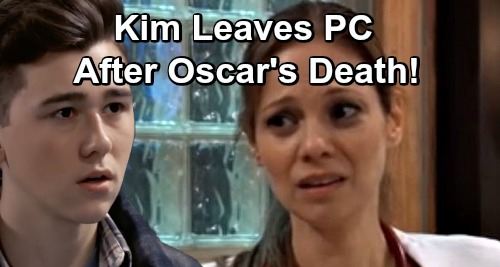 General Hospital (GH) spoilers tease that Oscar Nero (Garren Stitt) will keep marching toward the inevitable. He’s got an inoperable brain tumor and the clinical trial failed, so there’s just nothing else that can be done. Oscar could’ve turned to some crazy cure or procedure in another country, but there’s no guarantee anything would’ve worked. He probably would’ve just lost what little time he has left.

Instead, Oscar will continue to live life to the fullest and make the most of his remaining days. Naturally, many of those days will be spent with Josslyn Jacks (Eden McCoy). It breaks her heart to think about losing Oscar, but she’s trying to make peace with it. Joss wants to make some good memories and carry those with her once Oscar’s gone. General Hospital spoilers say that’s all she can do that this point.

Josslyn is young and resilient, so she should be OK eventually. She’ll find a way to move on with her life, but that task may be tougher for Dr. Kim Nero (Tamara Braun). From the moment Oscar was born, he’s been Kim’s whole world. Kim just won’t know what to do with herself once Oscar’s gone. GH fans can definitely expect some meltdowns and big decisions.

Kim apparently never really moved on after her fling with Drew Cain (Billy Miller). It’s possible she was that hung up on him, but maybe not since she just tossed away her reunion chance to get back together with Julian Jerome (William deVry). Kim certainly pined for Drew, but her decision to never get serious with anyone was probably more about Oscar. Being his mom was clearly her priority.

After Oscar’s terminal diagnosis came, Kim became even more determined to focus on her son. She’s done everything in her power to help Oscar live a normal life for as long as he can. What happens after Kim’s priority fades away? When you build your world around someone and that person dies, it’s obvious that world’s going to crumble.

Kim’s about to go through the most difficult ordeal she’s ever faced. Whether she keeps leaning on Julian or turns back to Drew, it may not be enough. Can Kim handle staying in Port Charles where there are so many memories and Oscar connections? It could be hard to be around Drew or even Josslyn after Oscar’s time runs out. Kim could end up looking for a fresh start elsewhere.

Many people think Braun is great, but Kim isn’t exactly an exciting character. Could Kim get cut after Oscar’s exit? Will she leave town to find a new path after Oscar’s death? We’ll give you updates as other General Hospital news comes in. Stay tuned to ABC’s GH and don’t forget to check CDL often for the latest General Hospital spoilers, updates and news.