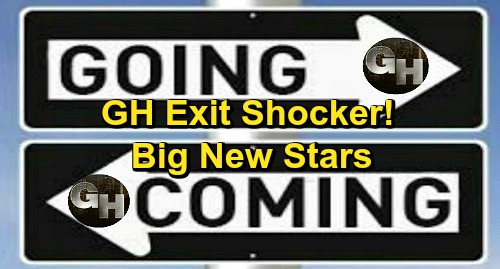 General Hospital (GH) spoilers reveal that we’ve got some comings and goings news to pass along. For starters, let’s talk about a couple of debuts, Joe Flanigan just made his first appearance as Dr. Neil Bryne. He’s Alexis Davis’ (Nancy Lee Grahn) therapist, but it looks like he’ll also end up being her love interest.

In an interview with Soap Opera Digest, Grahn talked about how much she likes working with Flanigan. “He is an extremely accomplished actor, writer and an impressive politico, and I have thoroughly enjoyed meeting him, conversing and getting to know him,” Grahn said. She later added, “I’ve met my match.” Since these costars get along so well, Neil and Alexis may be the perfect match, too.

Other General Hospital spoilers say Inga Cadranel will appear as Harmony on Monday, February 11. She’s in charge of the Beechers Corners chapter of Dawn of Day. Harmony will be happy to answer Jason Morgan’s (Steve Burton) questions when he starts digging around.

Bradford Anderson will also make more appearances as Damian Spinelli this week. He’ll do whatever he can to pitch in on Jason and Sam McCall’s (Kelly Monaco) mission. We should also mention that Spencer Cassadine (Nicolas Bechtel) will show back up in town this week. Sonny Corinthos (Maurice Benard) will offer some advice to this kid with a guilty conscience.

Since Spencer tampered with the mayoral election results, he’ll continue to have a hard time coping with what he’s done. Sonny will urge Spencer to come clean and try to move on. He’ll think a confession may be the only way Spencer will be free of the past.

Unfortunately, there’s also some departure news to share. General Hospital spoilers say the show’s losing Valerie Spencer (Brytni Sarpy) to a rival soap. The Young and the Restless put Sarpy on contract, so she’ll be portraying Elena Dawson over there soon enough.

Unless GH chooses to bring in a recast for some reason, it looks like Valerie and Kristina Corinthos-Davis’ (Lexi Ainsworth) budding attraction storyline may be dropped. On the bright side, Sarpy scored an awesome contract role. Many General Hospital fans will miss Sarpy, but she’ll undoubtedly do a great job over on Y&R.