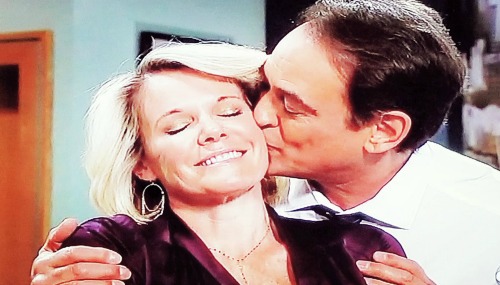 General Hospital (GH) spoilers tease that Ryan Chamberlain (Jon Lindstrom) will keep pulling Ava Jerome (Maura West) closer and closer. Of course, Ava believes the esteemed Dr. Kevin Collins (Jon Lindstrom) has fallen for her instead. She marveled as “Kevin” declared his love on the GH rooftop recently. Ava can barely believe that a man like “Kevin” would be interested in someone like her.

Ryan accepts Ava for who she is. In fact, he embraces Ava’s dark tendencies. Ryan doesn’t try to change Ava, which is awfully appealing after her last romance. Dr. Griffin Munro (Matt Cohen) liked to act like he was the saintly one in the relationship, but he ended up sleeping with Ava’s daughter.

They were technically broken up when Griffin had sex with Kiki Jerome (Hayley Erin), but it was still a low blow. Griffin couldn’t even wait a whole night before hopping in bed with the worst possible person. There’s no way he could’ve hurt Ava more. It’s easy to see why Ava has fallen so hard for “Kevin,” who’s put her on a pedestal.

Unfortunately, General Hospital spoilers Ava’s perfect bubble is destined to burst. There’s a good chance Ryan will propose before his big secret is discovered. GH might as well raise the stakes before the truth comes out. The higher Ava’s heart soars, the more devastating her relationship’s downfall will be.

It’s been crushing to watch Ava cozy up to Ryan while knowing what we know. Ryan slept with Ava the very night he killed Kiki! GH viewers were disgusted just like Ava will be when she figures out Ryan is to blame. Ava already lost her daughter, but she’s about to lose her new love, too.

Although Ava figured she’d be able to reconnect with Kiki eventually, she still let a man come between them. Ava cut Kiki out of her life and tried to keep her from her little sister, Avery Corinthos (Maurice Benard), too. Was Ava too brutal? Does she deserve the pain she’s felt and will continue to face?

Despite Ava’s mistakes, it’s tough to hold a grudge after all the sorrow she’s endured. Many GH watchers might argue that Ava’s paid the price and then some. It all depends on your feelings regarding Ava and her actions!

Do you feel sorry for Ava or do you think she brought this on herself? We’ll give you updates as other GH news comes in. Stay tuned to the ABC soap and don’t forget to check CDL often for the latest General Hospital spoilers, updates and news.