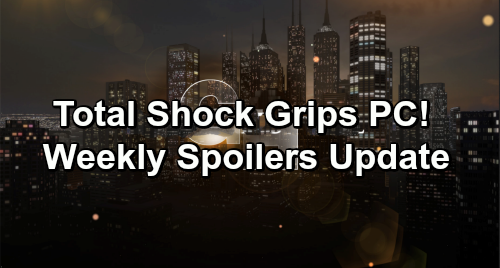 General Hospital (GH) spoilers update for the week of February 18-22 tease that the action will heat up in Port Charles. First, Spencer Cassadine (Nicolas Bechtel) will continue to battle guilt over his election tampering. Charlotte Cassadine (Scarlett Fernandez) will push Spencer’s buttons, so he’ll grow weary of all the pressure.

Of course, Valentin will continue to fret about the secret he’s keeping. He’ll be desperate to hide the truth about Sasha Gilmore (Sofia Mattsson), but that could be tough with Maxie West (Kirsten Storms) and Peter August (Wes Ramsey) sniffing around. Over with Sonny Corinthos (Maurice Benard), he’ll have suspicions as well. Sonny will feel like he’s not getting the whole story from Robert Scorpio (Tristan Rogers).

It appears this is about Dante Falconeri (Dominic Zamprogna) and the mission he’s currently on. Robert seemed awfully in the loop during his last chat with Sonny. After another conversation, Sonny may think Robert knows more about missing Dante than he’s letting on.

Other General Hospital spoilers say Carly Corinthos (Laura Wright) will score some stunning evidence. Will this evidence tie in with “Wilson Ritter” at Ferncliff? GH fans will recall that “Wilson” is actually Dr. Kevin Collins (Jon Lindstrom), who’s trapped at the facility thanks to Ryan Chamberlain (Jon Lindstrom).

Carly might come up with proof that something’s just not right. Lulu Falconeri (Emme Rylan) will get the same feeling later this week, but the situation should be a bit different. Perhaps Lulu will sense that Laura Webber (Genie Francis) is in trouble. Laura certainly will be! After she follows Ryan to Ferncliff, General Hospital spoilers say Laura will get locked up with Kevin.

Elsewhere, Drew Cain (Billy Miller) and Jason Morgan (Steve Burton) will have a meeting. They’ll most likely discuss Sam McCall’s (Kelly Monaco) risky mission and how they can help. Jason will grow increasingly worried as Sam gets closer to Shiloh Archer (Coby Ryan McLaughlin). GH spoilers state that Sam will learn some fascinating details that could help with her plan, but she’ll still be in danger.

Kristina Corinthos-Davis (Lexi Ainsworth) will also have lunch with Michael Corinthos (Chad Duell) this week. Will he pick up on Kristina’s jealousy? It’s clear that Kristina doesn’t like how close Shiloh and Sam are getting. Regardless, Michael will be a good big bro and offer some solid advice.

Next, General Hospital spoilers state that Elizabeth Webber (Rebecca Herbst) will be in total shock. That’s because Franco Baldwin (Roger Howarth) will confess to the crimes he’s been accused of. He’ll plead guilty as part of Jordan Ashford’s (Briana Nicole Henry) plot, but Liz won’t know that. As Liz reels, Cameron Webber (William Lipton) will hit the roof. He’ll be absolutely furious over Franco’s behavior.

Finally, Ava Jerome (Maura West) will have another heated showdown with Carly. They’ll rip into each other as usual, so expect some explosive scenes. We’ll give you updates as other GH info emerges. Stay tuned to the ABC soap and don’t forget to check CDL often for the latest General Hospital spoilers, updates and news.